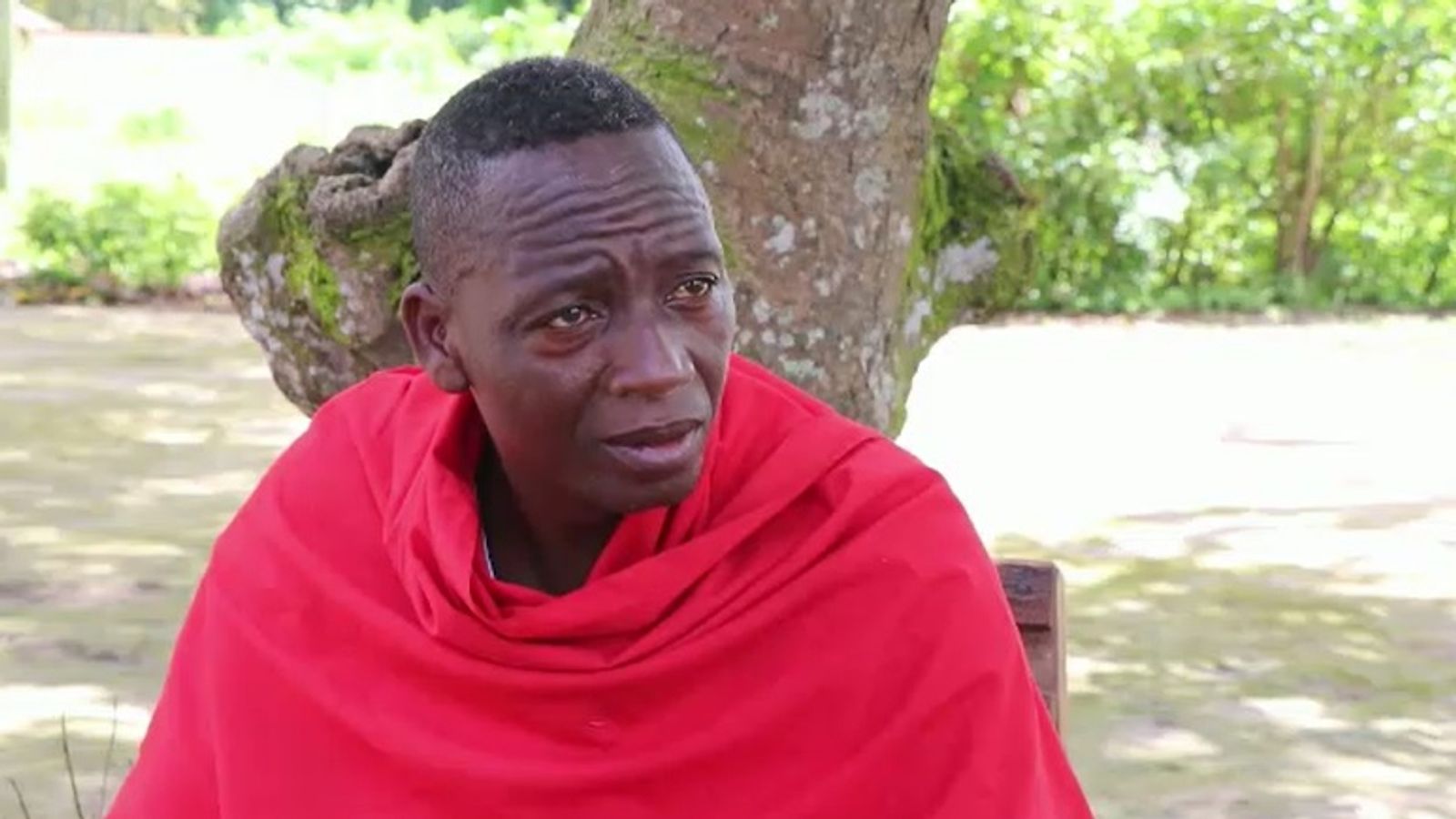 Farmers living in the Republic of the Congo say that they have been barred from accessing their land so that the French oil giant Total Energies and the Congolese government can use it for a high-profile carbon offsetting project to plant 40 million trees in the next decade.

According to an investigation shared exclusively with Sky News by Greenpeace UK Unearthed and the SourceMaterial investigative group, the project on the Lefini land reserve in the Bateke Plateau appears to have come at a significant cost to an estimated 400 farmers and their families.

In interviews with a SourceMaterial journalist, several farmers said that since planting began in November last year, they have been blocked from their lands without consultation or payment.

“Now that they have forbidden us to enter, how will we cope?

“In the fields, the white man has bought the lands, and we can no longer work our fields. And the people who have sold our land now forbid us to go there.”

Clarisse Louba Parfaite said: “Now, if you are seen with your tractors, you are chased away.

“The crops that we had planted inside, in the middle of the fields, not harvested to date, they refuse to allow our tractors to come and do the work.

“It’s to kill us, to send us back to being slaves again like in the past.”

It’s left some worried about feeding their children.

‘They have taken everything’

Pulcherie Amboula said: “We were not able to go far with our studies, so we gave ourselves to agriculture.

“I was working the fields to feed my children and grandchildren as well. And one day, to my surprise, we are informed that we will no longer be doing our fields. If we see a tractor over there, we will send the tractor back.”

“I feel like these people came to kill us on our own land.”

Maixent Jourdain Adzabi said: “Today, populations are crying, and bitterly. And us, our children? We raise them based on our fields. We work, we find money to get them into school.

“Today, we don’t have space to work, they have taken everything.”

A few well-established families were paid, but not very much – the equivalent of around 80p a hectare.

And some of those who received money say there was not a great deal of choice anyway.

Olivier Calver Ngouba said: “In the village, I am accused of having sold the ancestral lands, when it is not the case. When [Forest Economy] Minister Rosalie Matondo came, she never consulted before. She arrived with her delegation saying that she came to pay us ‘a symbolic franc’.

“We told her that since the dawn of time, we never sold our land, even our ancestors did not do it. She replied that it is the state that has recovered these lands.”

Documents show that affected residents apparently had little control over what was happening to them.

By the time some had accepted money to give up their lands the government had already changed the law, more than a year earlier, to become the private owner of the Lefini reserve.

That land was then quickly subleased via a French forestry consultancy called Foret Resources Management (FRM) to Total Energies, with reassurances from the government that anyone else trying to use it would be evicted.

Other documents seen by SourceMaterial show that after Total’s planting scheme began in November 2021, the forest economy ministry acknowledged a range of problems with the project, including complaints from unpaid families, confusion over land rights and limitations and a lack of leadership.

Total Energies and FRM defended what they described as an “ambitious” and “pioneering” partnership.

But in a statement they acknowledged issues with the scheme, telling Sky News that in the past few months they had “launched an assessment to identify the project’s potential impacts and to mitigate negative impacts that could not be reduced”.

They said: “This will establish a complete picture of those who are affected by the project in the overall project area… and will identify a remediation action plan, including livelihood restoration measures that comply with international standards. Results will be complete and made public in 2023.”

Example of much bigger problem

For those trying to reform the rapidly growing and poorly regulated voluntary carbon market, this is one example of a much bigger problem.

William McDonnell is the chief operating officer of the Integrity Council for the Voluntary Carbon Market, which is trying to establish and govern a set of globally accepted standards for carbon credits.

He told Sky News: “Social impacts have increasingly over the years been seen as really central to high integrity carbon credits.

“You don’t want, in doing one good thing, to be doing another bad thing.

“Partly it’s about justice and human rights and making sure that the interests of the local communities are safeguarded.

“But actually part of it is also a virtuous cycle.

“If the local community is involved, that makes it much more likely that those climate benefits will be there in the long term.”

Microsoft announces new multibillion-dollar investment in ChatGPT-maker OpenAI
Tesla shares pop over 11% on ‘better than feared’ earnings results, demand outlook
Volkanovski on Islam fight: ‘People have forgotten what I have accomplished’
Tesla reports record revenue and beats on earnings
Who’s trending up and who’s falling this week in golf?