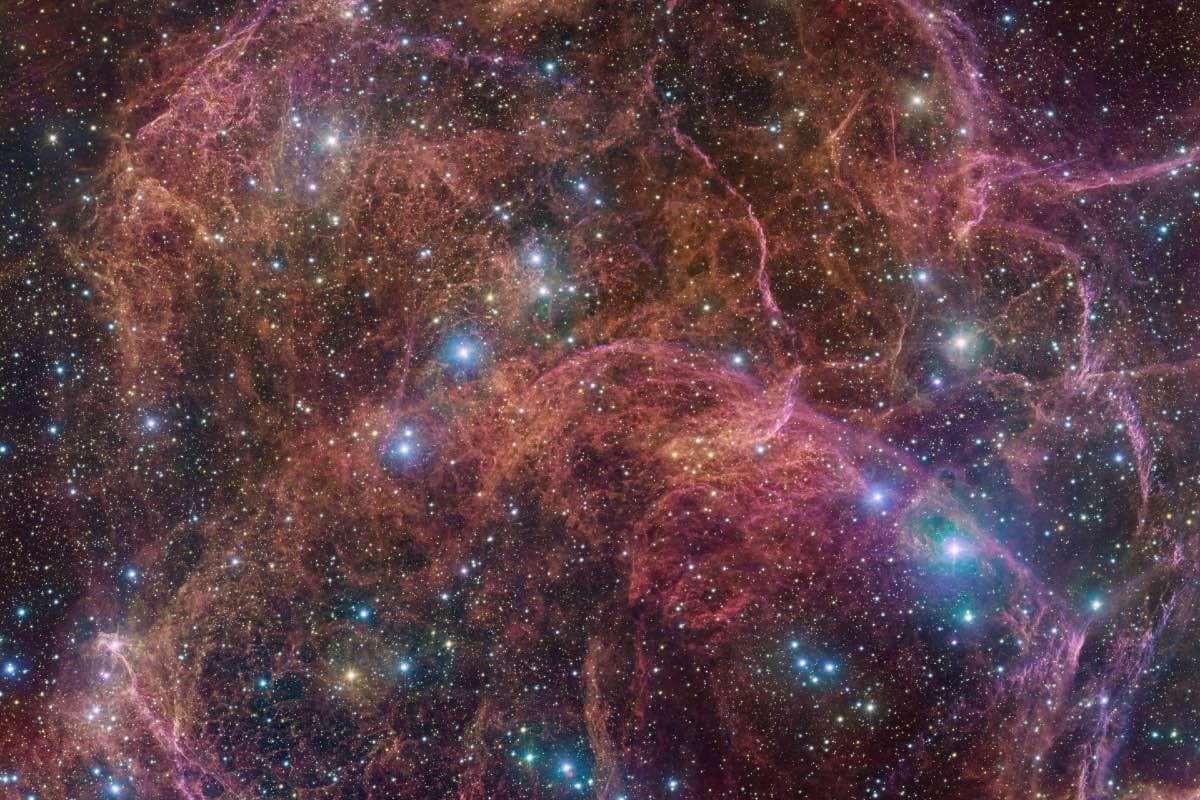 The aftermath of a large star’s explosive death is seen in an image released on Monday by the European Southern Observatory, showing immense filaments of brightly shining gas that was blasted into space during the supernova.

Before exploding at the end of its life cycle, the star is believed to have had a mass at least eight times greater than our sun. It was located in our Milky Way galaxy about 800 light years from Earth in the direction of the constellation Vela. A light year is the distance light travels in a year, 5.9 trillion miles (9.5 trillion km).

The eerie image shows clouds of gas that look like pink and orange tendrils in the filters used by the astronomers, covering an expanse roughly 600 times larger than our solar system.

“The filamentary structure is the gas that was ejected from the supernova explosion, which created this nebula. We see the inside material of a star as it expands into space. When there are denser parts, some of the supernova material shocks with the surrounding gas and creates some of the filamentary structure,” said Bruno Leibundgut, an astronomer affiliated with the European Southern Observatory (ESO).

The image shows the supernova remnants about 11,000 years after the explosion, Leibundgut said.

“Most of the material that shines is due to hydrogen atoms that are excited. The beauty of such images is that we can directly see what material was inside a star,” Leibundgut added. “The material that has been built up over many millions of years is now exposed and will cool down over millions of years until it eventually will form new stars. These supernovae produce many elements — calcium or iron — which we carry in our own bodies. This is a spectacular part of the path in the evolution of stars.”

The star itself has been reduced in the aftermath of the supernova to an incredibly dense spinning object called a pulsar. A pulsar is a type of neutron star — one of the most compact celestial objects known to exist. This one rotates 10 times per second.

The image represented a mosaic of observations taken with a wide-field camera called OmegaCAM at the VLT Survey Telescope, hosted at the ESO’s Paranal Observatory in Chile. The data for the image was collected from 2013 to 2016, the ESO said.

Apple launched the iPad Pro (2022) and the iPad (2022) alongside the new Apple TV this week. We discuss the company’s latest products, along with our review of the iPhone 14 Pro on Orbital, the Gadgets 360 podcast. Orbital is available on Spotify, Gaana, JioSaavn, Google Podcasts, Apple Podcasts, Amazon Music and wherever you get your podcasts.
Affiliate links may be automatically generated – see our ethics statement for details.
This article was originally published by Gadgets360.com. Read the original article here.