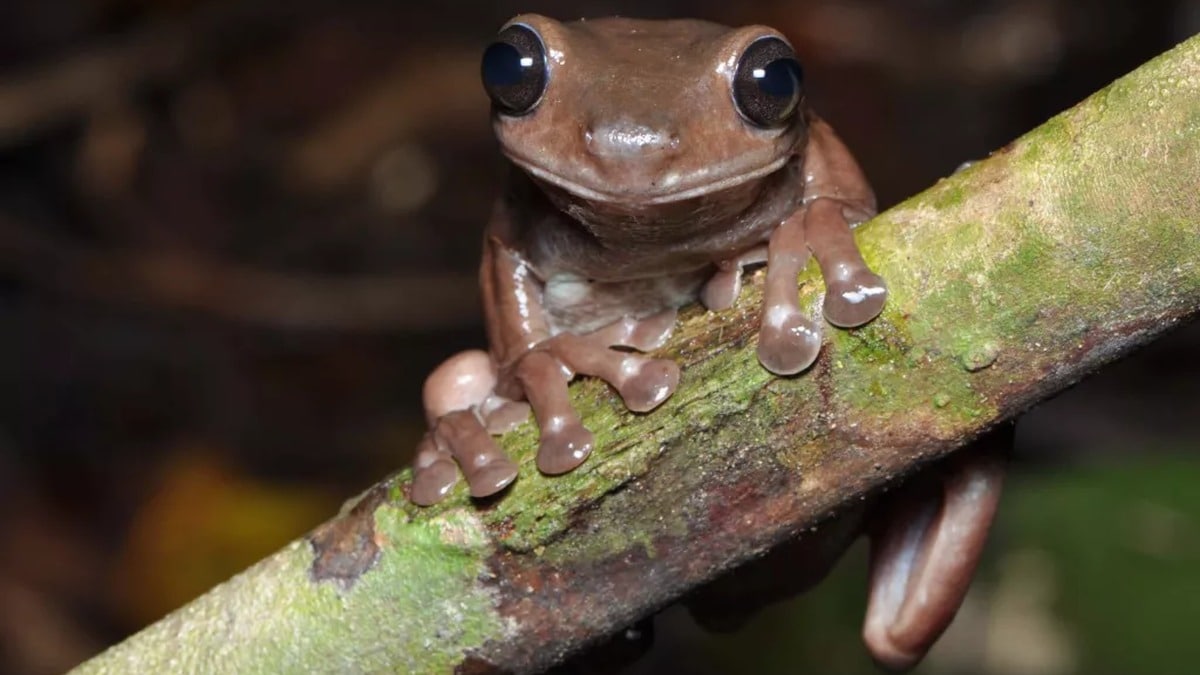 Researchers at Australia’s Queensland Museum have found a new, adorable frog species in the swampy, lowland forests of New Guinea. Named the “chocolate frog”, it has big, cartoonish eyes and its skin is the colour of milk chocolate. The candy-coloured amphibian is closely related to the green tree frog that’s common in Australia. The researchers discovered the frog while trying to draw a clearer family picture of the lineage of the green tree frog on both islands. Australia and New Guinea were connected by a land bridge until about 10,000 years ago and have hosted many of the same types of animals, including frogs.

These amphibians, known for their jumping abilities and croaking sounds, live all over the world and are among the most diverse animals, with over 6,000 species. The new species was first described by the researchers in a study published recently in the Australian Journal of Zoology. These researchers travelled to New Guinea and found the ‘chocolate frog’ in a hot swamp full of crocodiles.

Lead study author Paul Oliver, a biologist at Queensland Museum and Griffith University, told Queensland Museum Network that once the researchers saw the new species, they started calling it ‘chocolate frog’, and the name got stuck. Liver added, “What’s a little surprising about this discovery is that the well-known and common green tree frog of Australia has a long-overlooked relative living in the lowland rainforests of New Guinea. Because of this, we named the new frog Litoria Mira because the word ‘Mira’ means surprised or strange in Latin.”

Steve Richards, the co-author of the paper, said the researchers thought the species was probably widespread in New Guinea. “While New Guinea is not a place most Australians know well, many animal groups are shared. So, understanding biodiversity in New Guinea helps us to understand the history and origins of Australia’s unique fauna,” Richards said in a statement.

Queensland Museum CEO Jim Thompson said there is still much to learn about biodiversity in Australia and museums play an important role in “describing and conserving our natural world heritage.”

Interested in cryptocurrency? We discuss all things crypto with WazirX CEO Nischal Shetty and WeekendInvesting founder Alok Jain on Orbital, the Gadgets 360 podcast. Orbital is available on Apple Podcasts, Google Podcasts, Spotify, Amazon Music and wherever you get your podcasts.

Facebook Marketplace in EU, UK Antitrust Crosshairs Over Use of Classified Ad Data

FBI Says It Is Investigating About 100 Types of Ransomware, Many Trace Back to Actors in Russia: Report