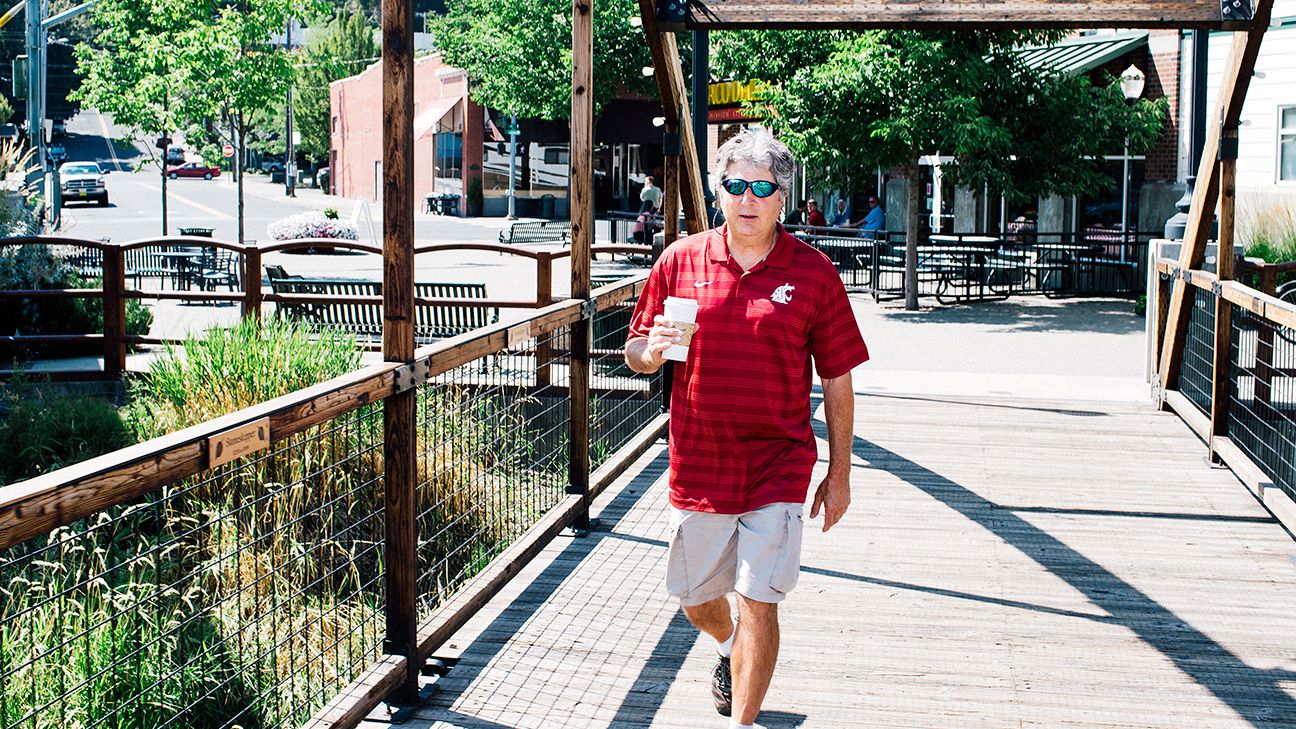 Perhaps the highest compliment about the most improbable college coaching career of this generation is that as time marches on, and new eras of homogenized football coaches emerge, explaining the Mike Leach coaching experience will sound like fiction.

A former rugby player with no college football playing experience? A Pepperdine Law grad who coached in Finland and then won in Lubbock, Pullman and Starkville? A coaching tree that includes Lincoln Riley, Dave Aranda and Dana Holgorsen? A list of former players that ranges from Kliff Kingsbury to Josh Heupel? It all sounds like a Dan Jenkins fever dream.

But that was Mike Leach, a Renaissance man masquerading as a football coach, who died Monday night, Mississippi State announced. He was 61.

“He’s truly a one-of-a-kind,” Washington State athletic director Pat Chun said of his former coach. “There will never be another Mike Leach to walk this earth or grace the sideline at a college football game.”

Experiencing Mike Leach’s more than three decades of college coaching helps explain why he was unique. As the college football world descends into mourning for the loss of an American original, it’s difficult to encapsulate the breadth of a career that spanned from Cal Poly to Valdosta State, Iowa Wesleyan to Kentucky, and College of the Desert to Oklahoma.

He touched three major conferences — SEC, Big 12 and Pac-12 — and can be traced through nearly every boldface name in the sport the past two decades as a colleague or rival. There are few college coaches at any level who don’t have a Mike Leach story, be it from their time as an opponent, using him as an inspiration or bellied up at a bar in the coach’s beloved Key West, Florida.

“He changed college football,” former Mississippi State athletic director John Cohen said. “He took college football from a very conservative offensive approach where coaches were afraid to make a mistake … I go back to the word fearlessness. He’s not afraid to take risks.”

Mike Leach was schematically brilliant, intellectually fascinating and stubborn, flawed and unconventional enough to never get a chance to coach a blue blood. He rarely showed contrition for mistakes and proved nearly allergic to apology, the same traits that both carved his impossible path and eventually limited it. Leach was difficult to manage, prone to self-induced controversy and managed to cross lines with embarrassing public moments at all his head-coaching stops, from an acrimonious exit at Texas Tech over allegations he mistreated a player with a concussion, leading to wrongful termination lawsuits, to controversies over inappropriate tweets at Washington State and Mississippi State.

It never bothered Leach that he wasn’t deemed fit for a blue-blooded address like Austin, Tuscaloosa or Los Angeles, as his nonconformity act was always better suited for off-Broadway. Instead, he won as a head coach at three of the toughest ZIP codes in the sport — Texas Tech, Washington State and Mississippi State — and left an indelible imprint on the game.

Leach’s 21 seasons as a head coach left him with a 158-107 record, a near-60% winning percentage at schools that rarely, if ever, won at that rate without him. Among his many legacies will be as perhaps the most adept at defying gravity at some of the hardest spots in the sport.

And he did it his own way, whether he was with the Pori Bears in Finland in 1989 or being profiled by “60 Minutes” as “The Mad Scientist of Football.”

“He’s such a one-of-a-kind individual,” Chun said. “It’s hard. He’s caring, he’s a lifelong learner. He has a unique curiosity that carried him through his entire life. That same curiosity is why the Air Raid became the Air Raid. He’s a world traveler, voluminous reader. He has an insatiable appetite to learn and discover. He’s a person who wasn’t just defined by football. He had an expertise in it.”

Leach refined a branch of the Air Raid tree of offense and ran it to obsessive perfection, in a way that will be felt for generations. In an era when coordinators hold Cheesecake Factory menu-size play sheets on the sideline, Leach’s offense stressed perfecting fewer than 20 plays and running them to Swiss precision. His call sheet looked more like an airline snack box menu, a weekly mockery of the schematic gurus sleeping in their offices looking for an edge.

Back in 2009, “60 Minutes” profiled Leach’s Texas Tech team as “the powerhouse that shouldn’t be.” And that notion will be much of his on-field legacy, as his stint in Lubbock will epitomize the power of his scheme over talent. Perhaps Leach’s most famous on-field moment came in November 2008 when the No. 6 Red Raiders shocked No. 1 Texas in Lubbock on a last-second touchdown pass from Graham Harrell to Michael Crabtree.

Leach’s Tech tenure included not only going 7-2 against Texas A&M but also needling the school’s Corps of Cadets. In a New York Times profile by author Michael Lewis in 2005, Leach said: “I ought to have Mike’s Pirate School,” he said. “The freshmen, all they get is the bandanna. When you’re a senior, you get the sword and skull and crossbones. For homework, we’ll work pirate maneuvers and stuff like that.”

Leach stayed defiantly and unflinchingly himself. Every conversation with Leach had the undulations of a small-town carnival ride. It would jerk in completely different directions, and by the end of his answer you’d have forgotten the question because he had veered through politics, modern art and mascot battles.

Mike Leach is one of football’s most unpredictable, entertaining personalities. Here’s what happens when you give him a mic.

Leach never forgot that this reporter lived in South Boston, and every conversation circled back to his fascination with local gangster Whitey Bulger. Leach wasn’t just curious — he had read multiple books, sought local updates and someday hoped to tour Southie. Call Leach for a quote on spread quarterbacks transitioning to the NFL, and you often ended up with 43 minutes on gangsters, officiating and politics. Often, you’d end up scouring through the eclectic material and hoping there were a few tangentially usable quotes, alternately amused and frustrated.

Those who were around him on his stops say Leach was devoted to philanthropy, but only if it wasn’t publicized. His deprecation, diatribes about marriage and mascots, and generally oddball nature often distracted from his intellect rather than accentuating it. But as the years pass and Leach’s vast, wide and quirky legacy is revisited, it’s clear his ability to change the sport will loom largest of all.

“Mike is one of those guys who doesn’t want to let you in on what he knows about football,” Cohen said. “When he does, it’s eye-opening. I don’t think he gets enough credit as a football mind. He’s a brilliant football mind.”