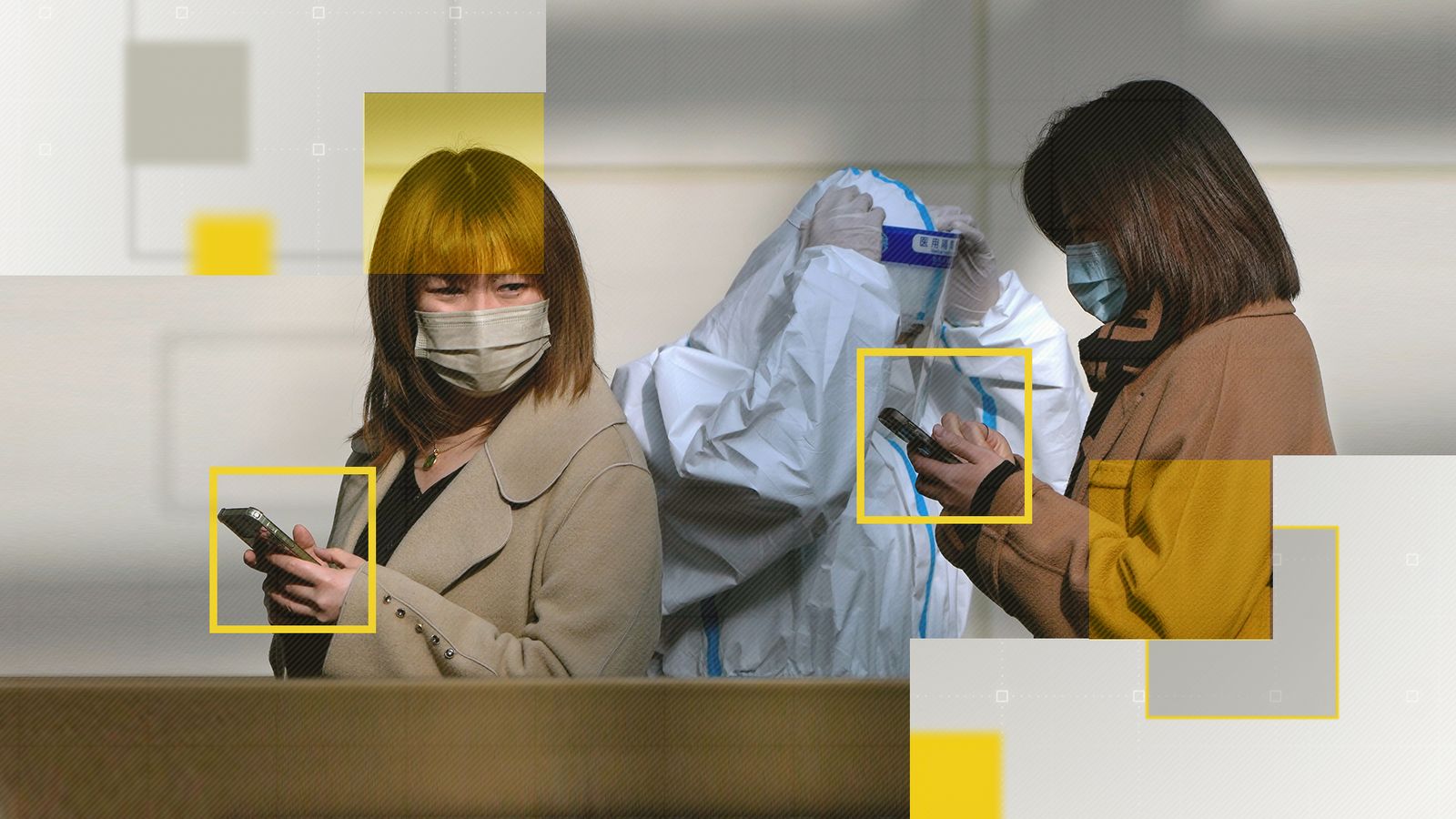 Posts calling on people not to be intimidated by the Chinese authorities are among the slew of messages censored by one of country’s biggest social media platforms.

Sky News has been tracking posts removed from Weibo since the biggest protests in decades broke out across the country at the end of November.

Weibo openly states on its platform that content is monitored and may be removed.

It’s not possible to know the true scale of how many posts they take down, but one online tool collects and restores Weibo messages that have been blocked in a bid to challenge social media censorship.

“First they’re afraid of speech, then text, then white papers, now even a road sign. They are afraid of everything. So why are we afraid of them?,” reads a typical banned post that has been resurfaced on freeweibo.org.

The message was published after the third night of protests against China’s tough zero-COVID measures, and was one of many posts calling on people to challenge the authorities.

At the time, police had been confronting protesters who were holding blank white pieces of paper and officers removed a street sign for one of the main rally sites in Shanghai, Urumqi Road.

Following the demonstrations, the country’s coronavirus rules began to be relaxed in an abrupt change of policy.

Deleted social media posts indicate residents are continuing to push back against the authorities.

A man from Zhejiang, a province near Shanghai, took part in online demands calling for those arrested during the protests be freed.

In a post published in early December, around a week after the restrictions began to loosen, he wrote “let them go home” and shared another user’s Weibo post that read: “It’s time to call to release the protesters!

“Thanks to these young men, we can go out of home freely and do not need to be transported to the cabin hospitals!”

Posts removed in the last few days include a Beijing man’s alleged experience of being confronted by the police over his comments on social media.

“[My text] caught the authorities’ attention. They knocked my door at night and caught me for the crime of ‘fabricating fact and disturbing social order’.

“They recorded my words again and again and called my compound administration office and the checkpoint I mentioned in the text. I’m not afraid because I didn’t lie.

“But horribly, once I left my home, they took away my phone so that I couldn’t contact anyone. They even forced me to say my phone’s password.”

The Chinese public’s anger against the zero-COVID policy may have appeared to flare up without much warning, seemingly sparked by fears the restrictions may have contributed to the deaths of a number of people in a building fire.

However, data gathered by the Armed Conflict Location & Event Data Project (ACLED), indicates that discontent has been steadily growing in the country.

ACLED has been recording protests relating to COVID throughout the pandemic. The data goes up to 30 November this year but is not exhaustive. For example, it does not appear to include protests that took reportedly took place at 50 universities. It is limited by the restrictions that surround information on protests in China.

The first coronavirus-related protest in China recorded by ACLED was on 28 January 2020, when hundreds of taxi drivers in Shanxi province protested over the lack of business due to the outbreak.

The first four months of the year saw similar protests, largely over concerns of salaries and access to food during coronavirus lockdowns. After that, protests relating to COVID-19 mostly fell away until April 2022.

This surge in spring this year led to headlines reporting that areas of China were already close to “civil unrest”.

From that point onwards, we can see a number of protests occurring throughout 2022.

The data also enables us to see how widespread the protests have been geographically, with demonstrations occurring across the country.

Seemingly in response to these country-wide protests, 1 December saw the beginning of a rapid rollout of reductions in COVID restrictions.

New concerns have arisen with this dramatic change, with Chinese social media users sharing their fears over the subsequent panic buying of coronavirus medicine and commenting on their experiences of fevers and sore throats online.

While some believe the rise in COVID rates in China are a result of the policy change, WHO emergencies director Mike Ryan said infections had already been rising. He said on Thursday: “The disease was spreading intensively because I believe the control measures in themselves were not stopping the disease.”

“China is really going from one extreme to the other, some joking that it’s no longer about zero positive COVID [no one having the virus] but about zero negative COVID [everyone getting it].”

Ms Koetse says she has seen social media users from smaller towns such as Baoding and Dazhou complaining that entire families have fever now and local facilities have limited resources, causing an overflow in local clinics.

But, she has also seen social media chatter in bigger cities such as Beijing and Wuhan debating whether people are going to the hospital even if their symptoms are mild.

The Data and Forensics team is a multi-skilled unit dedicated to providing transparent journalism from Sky News. We gather, analyse and visualise data to tell data-driven stories. We combine traditional reporting skills with advanced analysis of satellite images, social media and other open source information. Through multimedia storytelling we aim to better explain the world while also showing how our journalism is done.

‘I was sad for the institution’: Nancy Pelosi speaks out about McCarthy speaker vote
Suicide bomber kills at least 47 in Pakistan mosque attack
What has Belarus got to do with the Russia-Ukraine conflict?
Google Reportedly Working on Fast Pair Setup for New Android Phones, May Debut on Samsung Galaxy S23 Series
Zelenskyy ‘thankful’ for extra tanks but warns quantity and delivery time is ‘critical’