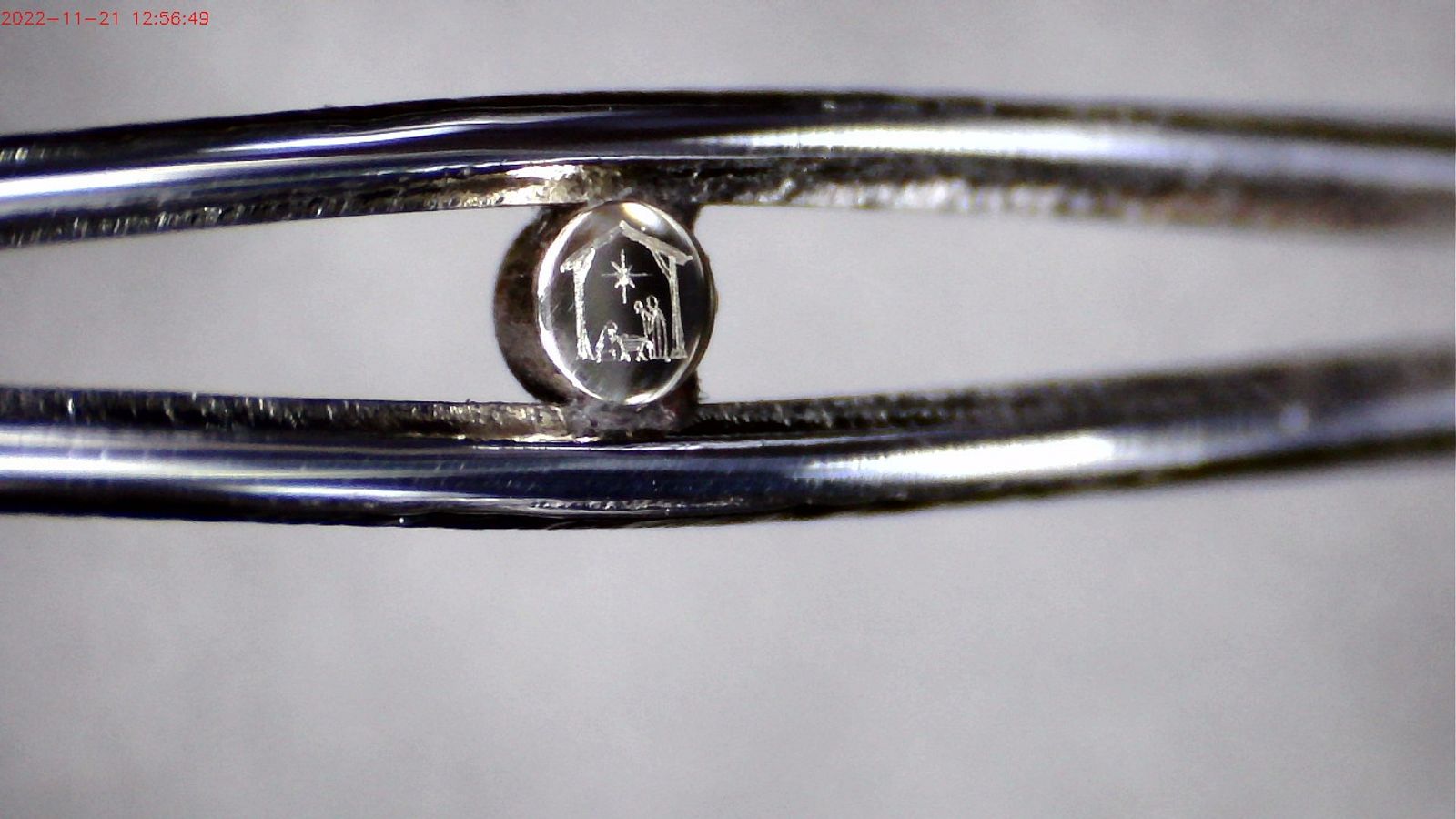 Three nights a week, from midnight until about 5am, micro-engraver Graham Short can be found in his home workshop, carrying out his unique, intricate work away from the potentially ruinous rumblings of daytime traffic.

World-renowned for his microscopic artworks, the 76-year-old from Birmingham goes to extreme measures to ensure conditions are perfect, from his handmade equipment to his undisturbed surroundings, and that he is also at his best physically and mentally to carry out his carvings.

His extraordinary process involves not just keeping nocturnal hours – limited to just three nights a week “because of my age now as I get tired – if I was a youngster it would be every night” – but also taking heart-slowing beta blockers to keep himself as steady as possible. He even has botox to keep blinking and twitches at bay. (More on this later.)

Known as the “Hands of a Genius”, most of his pieces take about three months to complete, his smallest lettering measuring just six microns (six thousandths of a millimetre). “That’s the size of a red human blood cell,” he says. “A human hair is about 100 microns thick.”

Timing, stillness and patience are everything.

Short’s recent works include a miniature portrait of Marilyn Monroe, created by punching 2,300 tiny holes into a £5 note, and a microscopic image thought to be the world’s tiniest nativity scene, engraved on a speck of gold inside the eye of a needle.

“You are so cool!” he says one young girl told him when she saw the Christmas scene on display at St Laurence Church, in Northfield, Birmingham. “There was squealing,” he says. “I thought, that’s nice, for a 76-year-old to be cool at last.”

You might also remember the artist making headlines in 2016, when he put four of the then new £5 notes into circulation, featuring tiny portraits of author Jane Austen.

After spending one in England, one in Wales, one in Scotland and one in Northern Ireland, art experts estimated the notes could be worth up to £50,000 to the lucky finders; while three were discovered, the elusive England fiver spent in Melton Mowbray, Leicestershire, is yet to be picked up. He carried out a similar feat with notes featuring footballer Harry Kane in 2018.

His work has led him to celebrity clients including Ronnie Barker, Stephen Fry, Uri Geller and even Kim Kardashian.

‘If a lorry goes past a few blocks away, I could feel it’

After leaving school at 15, Short started his working life at a printworks in Bordesley Green in Birmingham, where his roles initially included making the tea and the unenviable task of emptying mousetraps.

But after his apprenticeship, he went on to engrave letterheads, his skill eventually leading him to work for the likes of Harrods, Fortnum & Mason, Goldman Sachs, Morgan Stanley and even Buckingham Palace and Downing Street.

When hand-engraved stationery began to fall out of fashion, he turned to a talent he had acquired as an apprentice on the shop floor, where he and his colleagues would compete to see who could complete the smallest engravings.

His first micro artwork, a pin featuring the Lord’s Prayer, went on display about 15 years ago; since then, his tiny creations have made him a star in his field. But it all requires a huge amount of dedication and patience.

“I work at night to avoid the vibration from the traffic,” he says, talking me through his creative process. “I work through a medical microscope and it’s so powerful that if a lorry went past a few blocks away, I could feel it…

“I’m always trying to look at ways of keeping absolutely dead still. Recently, I’ve started looping a leather strap around my elbow; the other end goes round a heavy press next to me and I pull as hard as I can against it, and that keeps my hand absolutely rigid. But of course, if I’m not ready to engrave, which often happens, I have to rest because my arm’s aching, and then I pick it up and go again. But as long as I’m dead still, I’m fine. Fortunately I’m not shaking yet, at my age.”

A five-hour working window at night allows time for just seven or eight cuts for the smallest lettering. “I have to wait for the right moment,” he says. “That’ll give me a capital E and the letter F completed. It really is slow, but if I go up slightly in size, I can go quicker.”

The nativity scene took about 40 hours, he says. “They take an average of three months, mostly because I slip and I have to re-polish and start again. They never go right from start to finish.”

It’s a question that people always ask him: how does he handle the frustration when he slips? “It doesn’t bother me, strangely enough. I expect it to happen. It’s part of the work.”

‘Hilarious’ botox and working between heartbeats

Short moves on to discussing the botox, saying he has been having the treatment regularly for more than 10 years. He laughs as he shares his latest experience.

“Oh goodness, they were laughing at me in the church,” he says, speaking about his visit to display his nativity piece. “I’d only had it done two weeks [earlier] and they put too much botox round my left eye. The left side of my face was solid and I couldn’t laugh, I could only grin with one side, I had a lopsided smile. They thought it was hilarious.”

As a procedure most often associated with anti-ageing, I’m curious as to how a then 60-something came to the decision to go under the needle.

“I was on TV being interviewed and a friend, a surgeon, was looking at me,” he says. “He could see I was blinking quicker than I should and he said, ‘that’s no good for your work’.”

Now, Short maintains his botox every three months, “and it keeps my eyes absolutely rigid”.

He also takes potassium, magnesium and beta blockers. “I confess I eat them like sweets, but I wear a stethoscope when I’m working, listening to my heart. Within just half an hour of the tablets, my heart rate drops quickly to around 20 beats a minute. And that’s when I try to work, between heartbeats.”

As this point there should probably be a “don’t try this at home” warning, but the artist insists he is as fit as a fiddle. “I’m so healthy, it’s unbelievable. I’m a swimmer and I actually swim [up to] 10,000 metres every day in two sessions. A few years ago I was the European champion for 200 metres butterfly for my age and, and the record-holder for 1,500 metre front crawl. So I’m really fit for my age.”

Short later adds: “I know I go to extremes. I can’t do any more now, I’m at the limit.”

Kim Kardashian, Stephen Fry – and convicted Catch Me If You Can fraudster

While there are other micro artists in the world, Short believes he is the only engraver making the types of works he creates. It has changed his life. “I’ve met so many interesting people and I do talks now around the country. I’ve got lots of funny anecdotes to tell people about the rich and famous I’ve worked with.”

Ronnie Barker bought an engraved Shakespeare quote on the tip of a paper clip, he says. He has also worked for Stephen Fry and now counts Uri Geller as a friend. One former manager even asked him to engrave a compass for Kardashian, he says, following the birth of her first child, daughter North West.

And the American fraudster Frank Abagnale, who most will know from Leonardo DiCaprio’s portrayal in the 2002 film Catch Me If You Can, also got in touch.

“He sent me an email 10 years ago,” says Short. “It said: ‘If I had your ability when I was younger, I’d never have got caught.’ I kept in touch with him and I told him six years ago, when the new £5 notes came out, what I was going to do. He said: ‘Don’t touch it. It’s the 1928 bank act. You’ll be prosecuted for defacing the notes.'”

Short took his chances, and it all turned out fine. “Well… the police have never been round.”