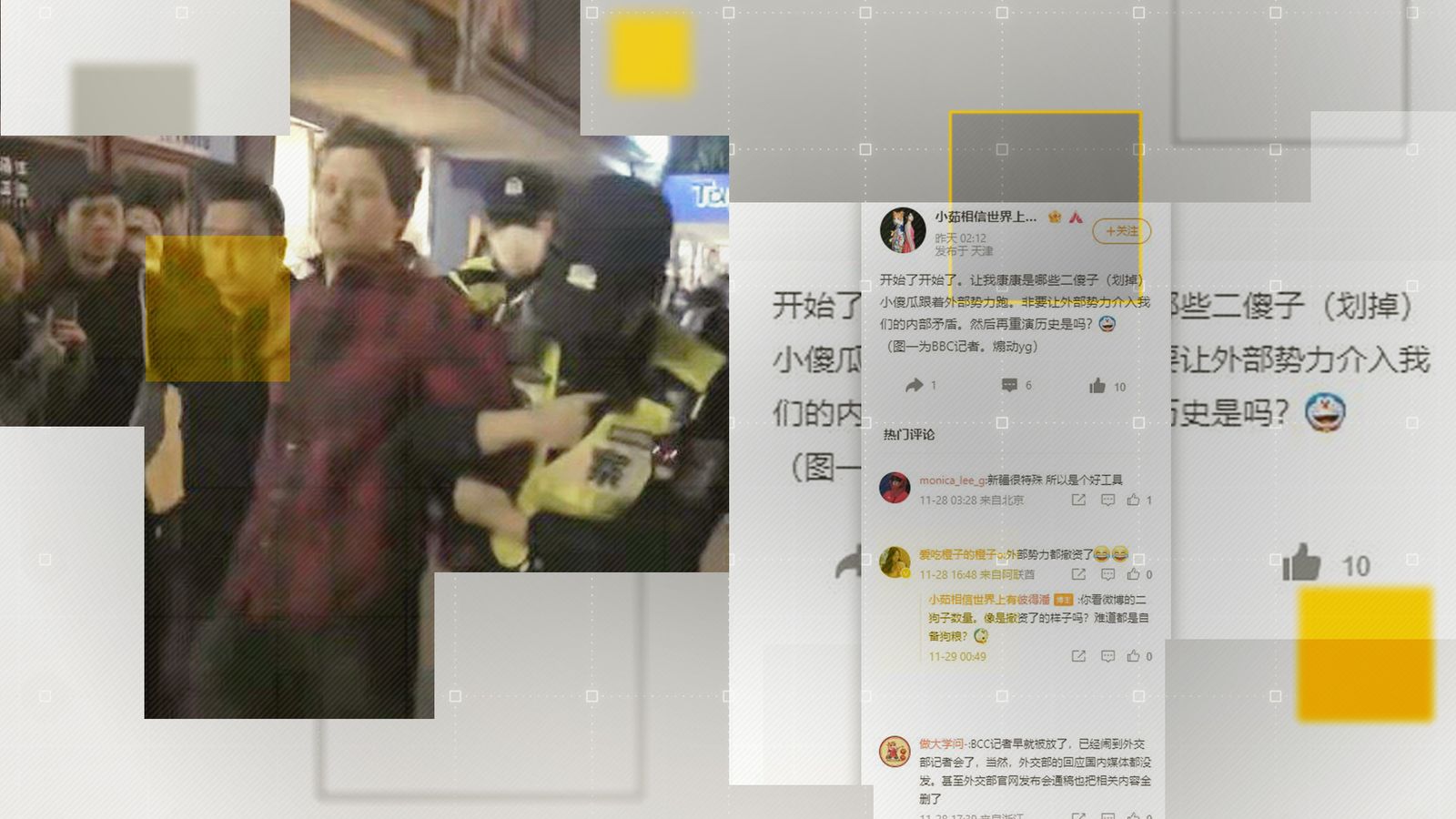 “Whoever introduces external forces to get involved is a complete traitor!”

“I understand the rally organised this time was by… the Ministry of Foreign Affairs of America.”

“Don’t be led astray by external forces. No matter what, you must love your country!”

These comments are far from unusual on the Chinese social media site Weibo.

A range of users – from those with a handful of followers (known as “fans” on the platform) to ones boasting millions of subscribers – have been repeating claims that “external forces” are responsible for the protests that have taken place across the country in recent days.

Rallies against China’s unusually strict zero-COVID measures spread to several cities over the weekend in the biggest show of opposition to the ruling Communist Party in decades.

The numbers of protesters have now dipped, likely in part because of low temperatures and a heavy police presence at key locations.

While the Chinese authorities have not directly commented on these rallies, they have repeatedly warned that “foreign forces” are a threat to national security and have interfered in the Hong Kong democracy protests.

This warning has been repeated by figures associated with the Chinese Communist Party, such as Ren Yi, the grandson of a Communist Party leader, Ren Zhongyi.

Ren Yi has almost two million fans on Weibo, where he writes under the username Chairman Rabbit.

In a recent post, he asks “what do overseas anti-China forces most want” from the protests and why did “foreign forces… come out to make a fuss and then withdraw”.

Popular TV pundit and commentator Yu Li, whose Weibo username is Sima Nan and boasts 3.16 million fans, jokes in one post that he wants to thank foreign forces for interfering in the protests.

He writes: “If the CIA or the National Endowment for Democracy has an office in Beijing, please tell me the address and contact information, and I plan to send them a gift.”

The idea that America’s Central Intelligence Agency has been involved in the protests appears in a number of posts from Weibo users.

In particular, a screenshot of a news article reporting that the CIA is looking to hire more Chinese speakers is being widely shared.

Another image being widely posted is a snapshot of the moment a BBC cameraman was detained by Chinese police while covering the protests.

According to officials, Ed Lawrence was arrested “for his own good” in case he caught COVID from the crowd. He was released after being beaten and held for several hours.

One of the users who posted a photo of Mr Lawrence called him a “little idiot” and commented “we must not allow external forces to intervene in our internal conflicts”.

Another Weibo user made an unfounded accusation against Mr Lawrence, claiming he was a “British agent who was caught pretending to be a BBC reporter”. The account provided no evidence to back up the claim.

The BBC confirmed Mr Lawrence was a staff member and was working as an “accredited journalist”.

Accusations of foreign forces meddling in the protests are also appearing on other social media sites.

Two Chinese Twitter users with a combined follower count of 53,400 posted what they claim is evidence that Westerners are using an encrypted messaging app to plan the protest.

The message on Telegram provided a time, meeting place and instructions to bring a white piece of paper, a symbol borrowed by those protesting in China from the demonstrators in Hong Kong.

Sky News found the Telegram chat but the messages were not in it. They could have been deleted.

As this wave of jingoistic social media messages spread across Weibo and other platforms, signs of China’s notorious internet censorship rules could also be seen.

Posts mentioning Shanghai, a Chinese city which saw large protests, appear to have been deleted en masse from Weibo.

This screenshot shows a search for 上海 (Shanghai) brought up fewer than 1,000 results.

While this screenshot for 北京 (Beijing), a comparable city in terms of prominence and population, resulted in almost 40 million hits.

Weibo openly states on its platform that content is monitored and may be removed.

As well as posts being deleted, those looking for information on the protests must contend with swathes of spam messages flooding social media.

Benjamin Strick, investigations director of Centre for Information Resilience, has identified more than 3,000 posts on Twitter that include hashtags for some of the cities in China where protests are taking place.

He says these posts are being used to “spam the tags with dating ads”.

Many of the accounts were made recently and have zero or few followers. Some 2,000 of the tweets use the text “I’m single, can I get a husband on Twitter.”

“For journalists or researchers looking up what’s happening in China at specific locations. This is what they’re wading through,” Mr Strick tweeted.

It is not possible to know if the spam messages are burying protest posts by design or coincidence, nor can we measure how many posts are being taken down from sites like Weibo.

But there are some groups fighting back.

Greatfire.org is a China-based group challenging Chinese censorship. It runs sites such as freeweibo.com which captures posts before they are deleted from the official Weibo platform and publishes them so they remain visible online.

Searching for terms like “protest” or “white paper” bring up a large number of banned comments. A link to the deleted post (which now displays as an error message) on Weibo is also provided.

Despite the levels of censorship facing Chinese citizens, protesters have been finding a way to get information out into the world, such as this video showing a man being dragged into a police car.

One of the co-founders of Greatfire.org, Charlie Smith (not his real name), told Sky News the events over the last week shows the censors are “fallible”.

He said: “These protests really highlight how the online censorship apparatus in China is fallible… [and] what has happened over the weekend shows that many Chinese are well aware of what is happening in the country.

“Yes, there is widespread censorship on social media in China, but this weekend’s protests illustrate that history cannot be erased.”

The Data and Forensics team is a multi-skilled unit dedicated to providing transparent journalism from Sky News. We gather, analyse and visualise data to tell data-driven stories. We combine traditional reporting skills with advanced analysis of satellite images, social media and other open source information. Through multimedia storytelling we aim to better explain the world while also showing how our journalism is done.

Sunak orders investigation into Zahawi amid calls to sack him
Ukraine War: ‘This is such a stupid tank’: Commander’s plea for modern tanks on Bakhmut frontline
What has Belarus got to do with the Russia-Ukraine conflict?
Twitter accused of being behind on rent once again – and this time, it involves King Charles
Ukraine Crisis: Russian forces try to surround Kyiv