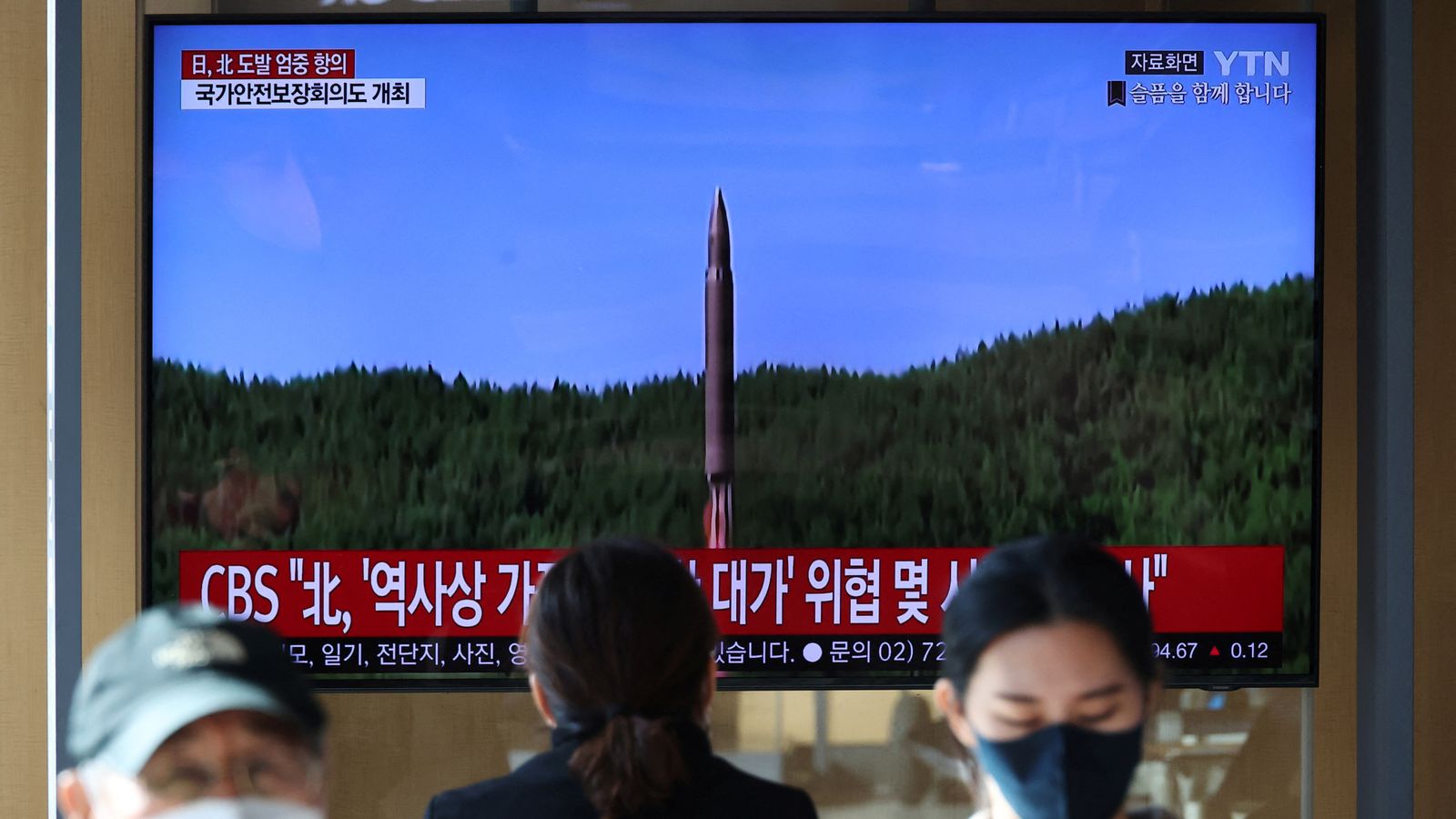 North Korea fired at least 17 missiles off its eastern and western coasts on Wednesday morning, according to South Korea’s military, with one landing near the rivals’ tense sea border.

Seoul quickly responded by launching its own missiles.

It was the most missiles fired by the North in a single day – and the first time a ballistic missile had landed near the South’s waters since the countries’ division in 1948.

“This is very unprecedented and we will never tolerate it,” South Korea’s Joint Chiefs of Staff said.

It landed around 35 miles from the South Korean city of Sokcho, on the east coast, and 100 miles from the island of Ulleung, where air raid warnings were issued.

“We heard the siren at around 8.55am and all of us in the building went down to the evacuation place in the basement,” an Ulleung county official said.

“We stayed there until we came upstairs at around 9.15am after hearing that the projectile fell into the high seas.”

Yoon Suk-yeol, the South Korean president, said it was an “effective act of territorial encroachment”.

South Korean warplanes fired three air-to-ground missiles into the sea across the NLL after Mr Yoon’s office pledged a “swift and firm response” so Pyongyang “pays the price for provocation”.

South Korea is in a period of national mourning after more than 150 people were killed in a deadly crowd crush in the capital, Seoul.

Hours before the missiles were launched, the North threatened to use nuclear weapons to get the US and South Korea to “pay the most horrible price in history” in protest over the two nations’ ongoing military drills that it views as an invasion rehearsal.

Washington said the drills were “purely defensive in nature” and that the US had made clear to North Korea that it harboured no hostile intent towards the country.

Today’s ballistic missile launches mark another step on what feels like an incremental but steady increase of tensions in the Korean Peninsula.

Not only was this the closest a North Korean missile has come to the South Korean shore since the countries’ division in 1948, but it also comes shortly after its longest known missile flight yet over Japan in early October.

This year, in fact, has already seen the most missile testing events of any year since Kim Jong Un took power in 2011.

It all signals a gradual but steady escalation.

It’s entirely possible that these incremental steps will ultimately lead to North Korea undertaking a full nuclear weapon test. If it does, it’s unclear how South Korea and its ally the US won’t be pulled into some form of retaliation – South Korea has already said there would be an “unparalleled response” to such a move.

And rhetoric is being significantly ramped up on both sides.

A recently released Pentagon National Defence Strategy report stated that any nuclear attack by North Korea against the United States or its allies would “result in the end of that regime”.

The North Koreans have said that any perceived attack would result in its enemies paying “the most horrible price in history”. They certainly see joint military drills between South Korea and the US as highly provocative.

Years of sanctions and diplomatic pressure have not deterred North Korea from developing a nuclear weapons programme. Deterrent in the form of hardened language and shows of military strength may be one of the few tactics remaining.