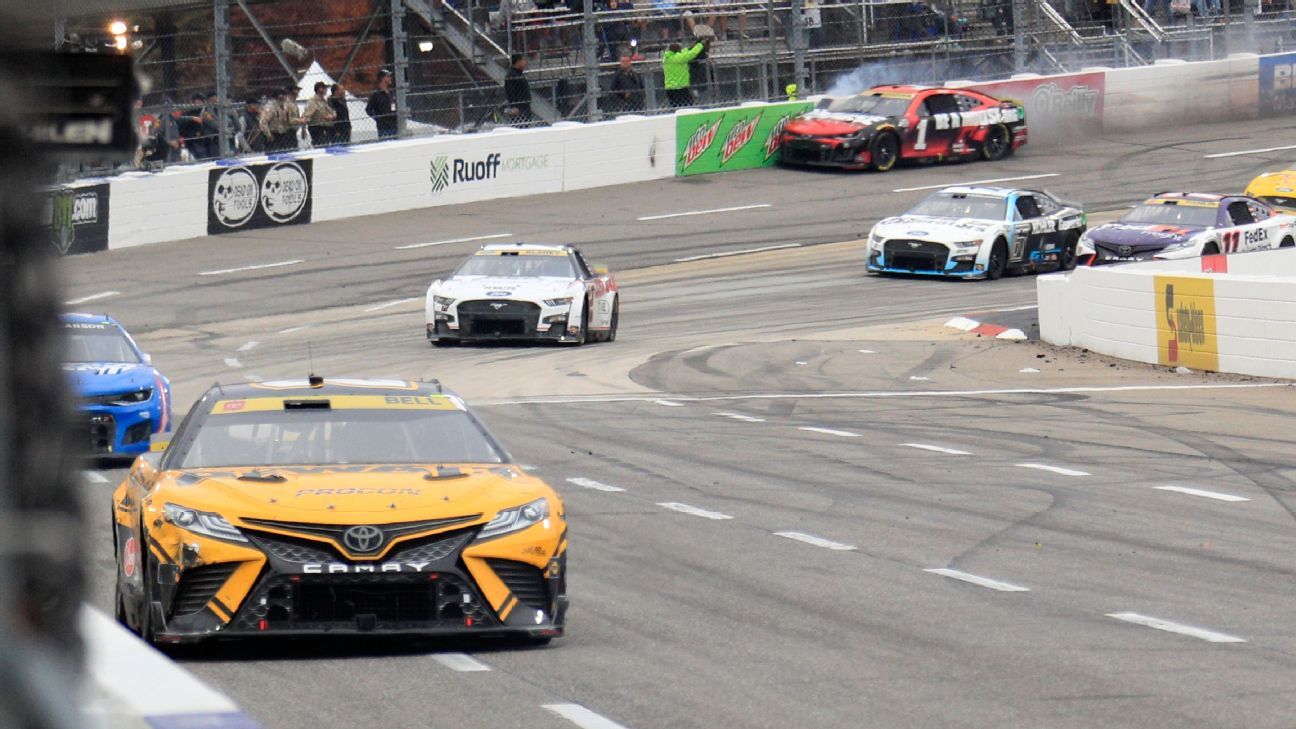 On Monday night, we had to choose. Something sweet to consume or something clever that someone comes up with, maybe even something we’ve never seen before?

On Sunday evening at Martinsville Speedway, we weren’t forced to pick one or the other. We got it all at once. And that led to a rush that not even the biggest bag of sugar and chocolate could possibly supply. A surge of WTH adrenaline that felt so good it managed to accomplish what most believe to be impossible. For a couple of hours on an autumn Sunday, NASCAR enjoyed more buzz than the NFL. All thanks to Ross Chastain, who topped the field with the most reality-defying move seen from a Cup Series machine at NASCAR’s oldest racetrack.

In case you’ve been asleep or have had all your social media feeds muted, here’s what happened. Chastain, running behind Denny Hamlin on the final lap of the final race before the NASCAR Championship Four will fight for the title at Phoenix Raceway on Sunday, knew that he had to beat Hamlin if he wanted to be included in that season finale quartet. So, the 29-year-old dropped the hammer like Cole Trickle, only it was for real. In a tactic that he later admitted was taken from EA Sports NASCAR Chase for the Cup 2005 on his Nintendo GameCube, he ran his No. 1 Chevy so high that the racecar rode the wall like one of those mechanical rabbits running on a rail at the dog track.

He pulled off what has since been recognized as perhaps the fastest race lap ever recorded at Martinsville, dot-dot-dotting his way around that wall a full two seconds faster than race winner Christopher Bell. He rocketed from 10th to fifth, edged Hamlin at the line and made the cut to be among the title contenders — alongside Bell, Joey Logano and Chase Elliott — one week from now.

Hamlin was stunned. Chastain was stoked. The internet was on fire.

If I’m being completely honest, though, it was a slightly different fire than I expected. Not from everyone. Judging by the texts and phone calls that I received from friends who never pay any attention to motorsports, especially in the fall, the awesomeness of Chastain’s move struck a chord and a funny bone with many.

That chorus of wows and WTHs from those who wouldn’t know a sparkplug from a wall plug is perhaps why I was a little taken aback by the comments that came from those who live with high-octane fuel in their bloodstream year-round.

Woke up this morning and my brain was still all… pic.twitter.com/sdF1k88nWw

Logano was not impressed. “It was awesome, it was cool. It happened for the first time. There’s no rule against it. There needs to be a rule against this one because I don’t know if you want the whole field riding the wall coming to the checkered flag.”

Neither was Kyle Larson, a guy who has spent his entire career running inches off the wall, but not up against it, at least not in a stock car. Well, OK, he did once, at Darlington one year ago and even brought that up on Sunday at Martinsville, saying that it was “embarrassing.”

But do we really believe that, because Chastain did what he did in a desperate moment to try to win a championship, now every single time that the checkered flag is shown that everyone is suddenly going to start riding the top of the outside wall like Tony Hawk on a city park guardrail?

Sure, we had never seen a moment exactly like this one. But we did see Carl Edwards unsuccessfully bang off of the wall at Kansas Speedway in 2008 to try to defeat the man who continually kept him from winning a championship, Jimmie Johnson. It didn’t work, but everyone laughed about it after the fact, once everyone was done applauding the guts that Edwards had shown, as ill-advised as his decision making may have been.

NASCAR old-timers still say that the greatest finish in the sanctioning body’s history, across all divisions, was when NASCAR Hall of Famer Richie Evans crossed the finish line with his right side tires all the way atop the wall and his Modified machine looking like Joey Chitwood at the state fair.

So, let’s think about this. Had the move we saw Sunday been executed by the likes of Dale Earnhardt, Cale Yarborough, Tim Richmond or any other sacred demigod of stock car racing, would so many people have been so offended? Because it was Chastain, who not so long ago was best known for being sponsored by watermelons, were people quick to dismiss the move as reckless as opposed to a badass move by a much more worthy legend?

If Chastain had attempted the “Pass in the Grass” in the 1987 NASCAR All-Star race instead of Earnhardt, would it have led to new rules instead of creating paintings of a moment that people still have hanging in their living rooms? If it had been Chastain who dive-bombed his way through the corkscrew at Laguna Seca in 1996 to beat Bryan Herta instead of Alex Zanardi, a driver who was praised for his willingness to win at all costs, would it have been declared “embarrassing?”

I’m not naive. I’ve been doing this for a while now. I understand that the rules are different for the stars versus the other guys. But I’ve also been doing this long enough to remember that there were a handful of people, including his rivals, who called out Earnhardt for what he did at Charlotte Motor Speedway. And yes, they don’t like to admit it now, but there were plenty of people in the Champ Car paddock who voiced their displeasure over what Zanardi did in the corkscrew.

I’ve also noticed that we still remember those moments because no one has attempted anything like them since. In other words, a moment is not a trend.

Every racer and every fan has the right to express concerns, especially when they are tied to safety. But it is also no coincidence that most of the people in the garage who speak up are also the ones who just lost. Whether that be Bill Elliott talking about Earnhardt in 1987 or guys who’ve been eliminated from the 2022 NASCAR playoffs speaking of Chastain.

What may or may not come from this we have yet to see. We might not see for a while. But please, I am begging you as a fellow race fan, take a moment … heck, take every night this week and keep watching Chastain’s move from Martinsville, over and over and over again. Enjoy it.

Because no matter who you are or who your favorite driver might be, that moment was amazing. Awesome. Unreal. The reason that we watch motorsports. To be amazed. To be wowed. And to be reminded of why they sell T-shirts with race car drivers’ faces on them.

Golfer ‘bit off nose of competitor’ in row over game
Thanksgiving miracle as man rescued 32 hours after cruise ship fall
Crushing defeat for Rishi Sunak is an ominous sign for despondent ‘Red Wall’ Tories
These are the best electric bike sales for Cyber Monday that are already running [Updated]
Ukraine’s armed forces have lost up to 13,000 soldiers since Russian invasion, official says