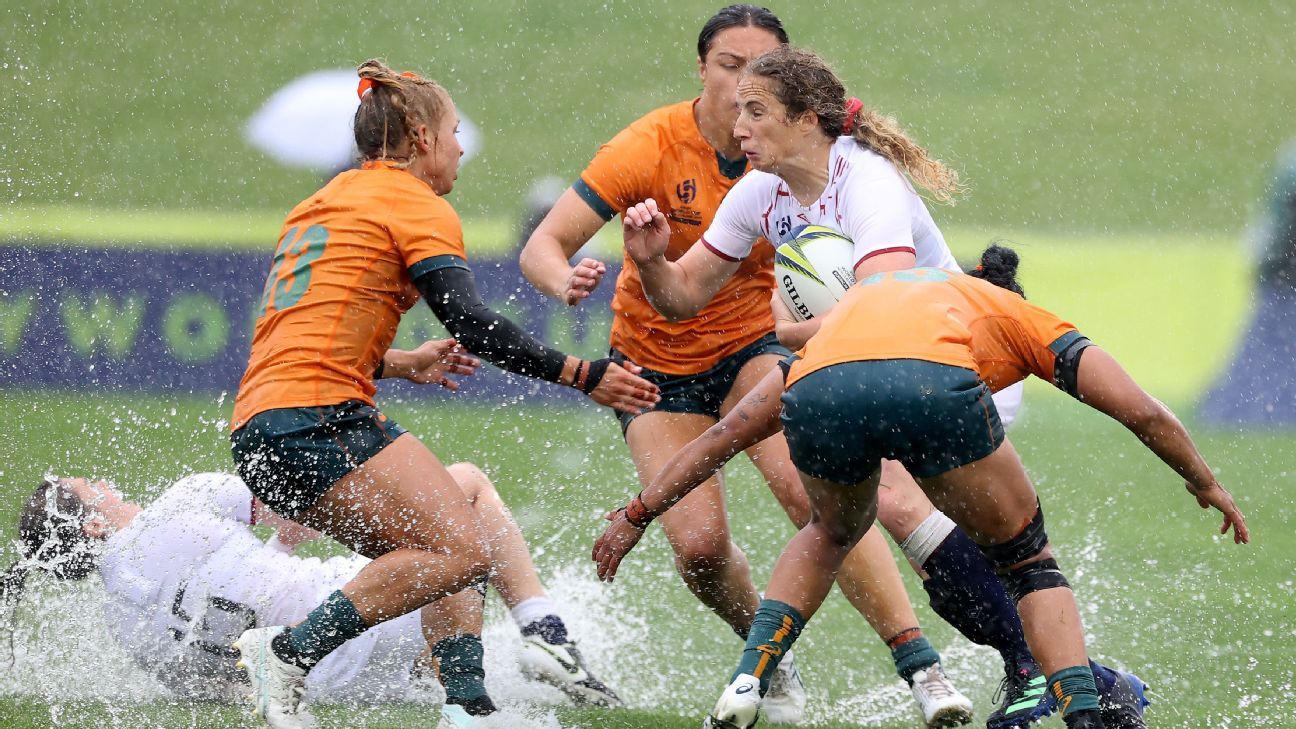 In the most horrendous of conditions, the Wallaroos found themselves in the mix for a potential World Cup boilover at halftime, but in the end, it was simply a bridge too far for the Australians, with England sealing their place in the semifinals with a 41-5 win.

With the rain bucketing down, the conditions seemed to suit the Red Roses with a massive forward pack that had outmuscled every team they’d faced so far in the tournament, and while they did so again against the Wallaroos, the many spilled balls and loose carries kept Australia within the game through the first half.

But it would take just minutes into the second for England to all but seal their spot in next week’s semi and blow Australia off the park.

Labelling themselves the “giant slayers” earlier in the week and changing the team mindset to “nothing to lose” ahead of the clash, the Wallaroos understood they’d need to play the perfect game in order to down the World Cup favourites. Unfortunately for the team in gold, their many consistent issues again popped up to cruel any of their chances to end England’s record winning run.

Emphasis was placed on the importance of the forwards in the lead up to the match, and with conditions suiting a tight, forward battle, pressure was on the Wallaroos’ pack from the opening whistle. From the get-go England demonstrated just how powerful their pack was, sending the Wallaroos scrum backwards on several occasions and earning themselves multiple penalties.

Just eight minutes into the match, England had found the ascendancy at scrum time and sent captain Sarah Hunter over the line for the opening try. After several fumbles and plenty of pressure from the Wallaroos, it would take another 20 minutes for the Red Roses to find the line for their second.

The Wallaroos would suffer through several fumbles of their own, while their struggles at the lineout came to the fore again; they were unable to win their first five of the match. In wet conditions, decisions at the lineouts were mindboggling, as they sent the ball long to the back on multiple occasions, putting too much pressure on hooker Adiana Talakai who was pinged for not throwing straight several times.

“England controlled the set piece fantastically,” Wallaroos coach Jay Tregonning said post-match. “Our accuracy wasn’t good enough in that area and we gave away too much ball there at the beginning.

“For me it’s hard because we know we could be better and more competitive in that game, than what we were, but I can’t be prouder of the team they’ve come together throughout this campaign and throughout the year.”

As the game wore on the difference between a professional tight five and a semi-professional was clearly evident, as the Wallaroos front row struggled to hold back the marching England pack and their lineout was a mess compared to a Red Roses team that had no issue finding their target and rumbling through a maul.

With a struggling set piece, the Wallaroos were kept in the match in the first half through brave defensive efforts with Bienne Territa, Sharni Williams and Em Chancellor making some impressive hits to slow down England’s momentum.

Poor discipline, another issue that has dogged the side through the tournament, would cruel their defensive efforts though with Shannon Parry shown a yellow card in the 28th minute following multiple infringements on their line. The most carded team in the tournament, the Wallaroos would concede two tries before their captain would return to the field. By the final whistle they’d have conceded 12 penalties all together, seven more than their opponents.

“Yeah, our discipline issues 100% came from England’s pressure,” Tregonning said. “Again we’re under pressure because that set piece wasn’t working as well as it should have, that’s my area and I take that a bit personally sometimes, and I’ll be having a look at that.

“Shannon’s binning comes off the result of the pressure that was coming from England, which again would be the result of our set piece not functioning that well.”

Starring down a 19-0 deficit heading into halftime, the Wallaroos refused to shut up shop, instead choosing to chance their arm and producing a stunning try with Chancellor finishing off a team effort that saw the ball travel through six pairs of hands, a Liz Patu dart and offload to Grace Hamilton, before the flanker dove over for the Wallaroos only points of the match.

While England quickly played the Wallaroos out of the match in the second, dotting down four tries, it’ll be these small wins — an amazing try, breakdown turnovers, held up tries, and defensive pressure — that the team will take pride in as their tournament comes to an end.

“I know some of the girls were probably disappointed with that result too, which is good and that’s what we want. We want the girls to be striving to be the best they can be and I think a few of them out there would know there are few things that they could have done better,” Tregonning said.

“We’re really proud of the effort the girls have put in but also the way we’ve been able to get the best out of the tournament.”

As the Wallaroos begin to reflect on their campaign, and for many return to work, despite two blowout losses, a quarterfinal berth in a tough pool as a semi-professional outfit cannot be overlooked and should be regarded as a success and stepping stone for future generations.

‘May the Force be with you’: PM ‘sad’ as Javid to step down at next general election
Rare protests in China as fatal fire collides with zero-COVID fatigue
Quick Charge Podcast: December 1, 2022
After decades as a nuclear powerhouse, France makes its play in offshore wind
First batch of Lordstown Endurance EV pickups leaving Ohio Foxconn plant for delivery