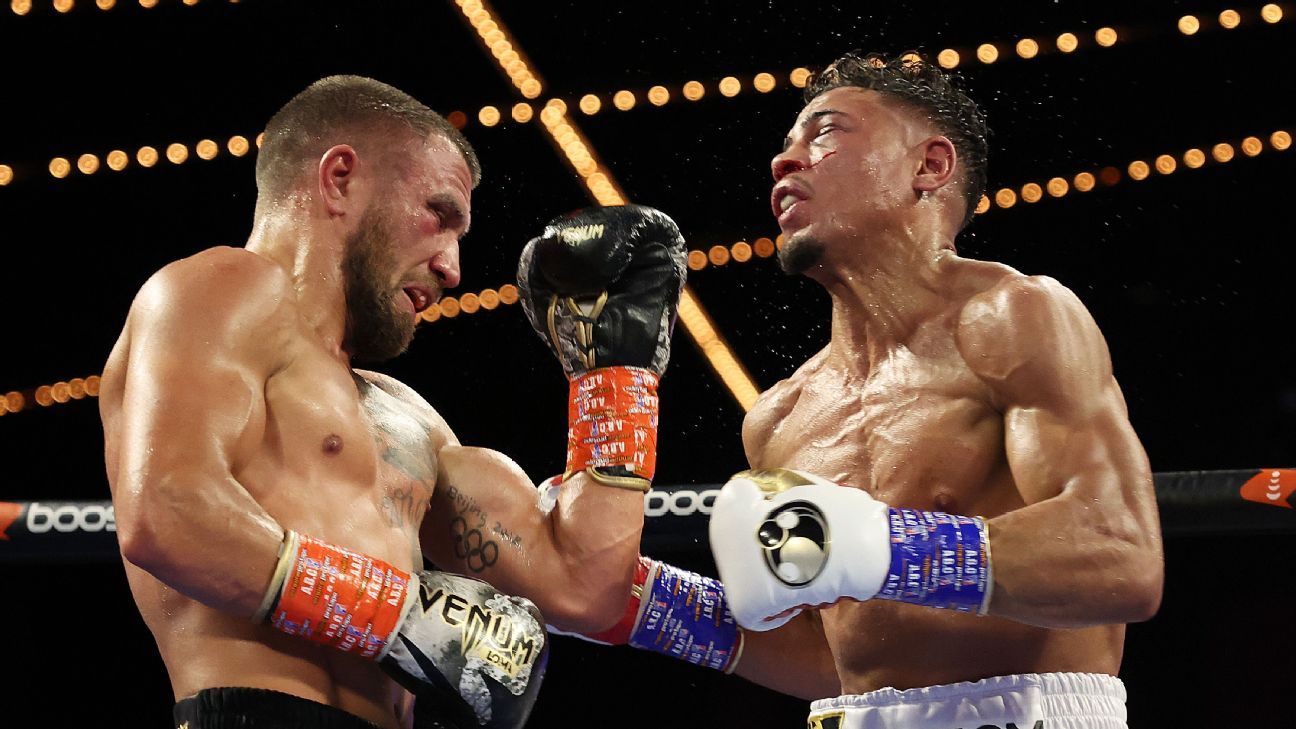 On a wild night for boxing, fans were treated to a little bit of everything. From big returns to the ring to rising prospects and celebrity bouts, there was plenty to choose from.

Former unified lightweight champion Vasiliy Lomachenko (17-2, 11 KOs) earned a big unanimous-decision win over Jamaine Ortiz (16-1-1, 8 KOs) in New York in his first fight since nearly a year away from the ring. And in Arizona, Jake Paul (6-0, 4 KOs) continued his meteoric rise in boxing with a unanimous-decision victory over former UFC middleweight champion Anderson Silva (3-2, 2 KOs).

What can we take away from a full slate of boxing matchups this weekend? Marc Coppinger, Marc Raimondi and Timothy Bradley Jr. offer up their thoughts from a highlight-filled night of boxing.

What must Lomachenko do to return to his championship form?

Lomachenko is a generational talent that was forced to move up in weight — twice — to truly be tested. At 135 pounds as he approaches his 35th birthday in February, he appears to be slowing down.

Maybe it’s the inactivity, paramount for a fighter who relies on speed and timing to punish opponents and beat them to the punch. Maybe it was the style of Ortiz, a physically strong fighter with athleticism and an educated jab. Or could Lomachenko be past his peak, and while still plenty good enough to beat most fighters, incapable of reaching the same heights he once enjoyed?

Time will tell, but if Lomachenko is going to perform against better, more experienced fighters than Ortiz, he’ll need to be more active and start faster in those fights. Just like he did against Teofimo Lopez Jr. in his 2020 loss, Lomachenko was slow from the opening bell on Saturday until he came on strong over the second half.

Against better fighters — like Devin Haney — he can’t afford to give up such a lead on the scorecards. And just maybe, Lomachenko would be better served fighting at 130 pounds. But for now, he must find a way to return to his way of creating unique angles, the bread and butter of his game. — Coppinger

Jake Paul’s next opponent is an easy choice: Nate Diaz

This year was a frustrating one largely for Paul. For the second time, a fight with Tommy Fury fell through. Then, Fury’s replacement Hasim Rahman Jr. wasn’t able to make weight and the bout was canceled one week before its August date at New York’s Madison Square Garden. Paul wasn’t able to compete in 2022 at all until now — but he sure made the most of it.

Paul beat Silva, one of the greatest MMA fighters of all time, in the main event of a boxing card at Desert Diamond Arena in Glendale, Arizona on Saturday. Silva is 47 years old, but was such a striking savant — and had some success in beating boxers like Julio Cesar Chavez Jr. — that many people thought Silva would school the 25-year-old upstart Paul. That did not happen. Paul came on late in the eight-round fight and dropped Silva in the final round to seal a unanimous-decision victory.

The next step for Paul is much clearer now than it has been in a while. Diaz should be his next opponent, and if that wasn’t already obvious it was made more so when Diaz and his team got into it backstage with Paul and his team during the undercard. Diaz was in attendance to support his longtime teammate Chris Avila, who beat YouTuber Mikhail “Doctor Mike” Varshavski to open the main card. After Avila’s fight, there was an altercation in the back between Team Diaz and Team Paul. Several drinks were thrown in the skirmish.

After beating Silva, Paul called out Diaz and said to “fight me.” That seems to be the sentiment of most people following Paul’s traveling circus. Diaz fought out his UFC contract last month with a win over Tony Ferguson at UFC 279. He’s still under an exclusive negotiating window with the UFC, but Diaz has maintained he doesn’t want to return to the UFC just yet. Once that period expires, the Diaz and Paul sides should come together and try to make a deal for what would be one of the biggest combat sports events of 2023. Avila has now been on Paul’s undercard twice — and that’s no accident. Diaz vs. Paul makes perfect sense and probably has been a long time coming. — Raimondi

If the bout between former UFC contender Hall and ex-NFL star running back Bell was an audition for a future fight with Jake Paul, neither man delivered the performance that would convince people to buy that fight. Hall won handily, but couldn’t stop or badly hurt the strong, evasive Bell. Meanwhile, Bell acclimated himself fairly well despite his lack of experience. Hall was very complimentary of him afterward. But Bell needs to work on his fundamentals and technique before signing for a big fight.

Hall said he wants to keep going in boxing, and there’s no reason why Paul and his team can’t continue finding interesting matchups for him. Hall called out Paul afterward, but the crowd booed several times during the fight with Bell, and that certainly won’t be the kind of thing that will be attractive for Paul’s team. It’s interesting how a Paul matchup — and not a title opportunity — is the real currency on these types of shows. Paul is the money fight, clearly. And maybe Hall would make for a compelling opponent for him in the future with a more impressive showing in his next bout.

As for Bell, he has promise (relatively speaking), and he’s only 30 years old. He told me he was serious about boxing and perhaps even becoming a world champion in the future. Bell left the NFL to focus on boxing. And he’ll need more of that focus if bigger fights and better opponents are what he desires. — Raimondi

Is Jake Paul good for boxing?

I think he’s great for boxing. The minute I found out what he paid Amanda Serrano and got her the big fight against Katie Taylor, I knew he was good for the sport. And even MMA fighters, all the guys that complain about him not fighting a real fighter, got the biggest paychecks of their entire careers. So, to me, that’s respect. I go back to when I fought Manny Pacquiao, and that was the biggest paycheck that I ever fought for. And the first thing that Manny said to me when I saw him was, “Did you like the purse?”

Now the audience. Traditional boxing fans are different from Paul’s fans, but they will be tuning in. I’m sure he gained MMA fans from knocking out Tyron Woodley and Ben Askren. And then he has his followers who watch his fights as well. Whether you like it or not, this guy is a star. He was a star before he started boxing. He gets a lot of push and media attention. We even cover him on ESPN. He brings attention to boxing, and I want to see how far this goes. Everybody has a story — every fighter has a story. I just wanna see how this s— ends. I know how it began, now I want to see if he can do the unthinkable. Canelo Alvarez had a limited amateur background, he started boxing early on, like age 16. Then he fought his way up, like 47 fights, before he fought for a world championship. That’s possible for this guy. You never know. He seems to have the discipline, the work ethic and the business mindset to do it. But he also understands that he needs to win to keep it going. — Bradley

How does Haney-Lomachenko shape up?

One year ago, Lomachenko would have been favored to beat Haney. Now, after two dominant Haney victories over George Kambosos Jr. and a tougher-than-expected Lomachenko win over Ortiz, there’s no doubt that Haney is the favorite.

Haney proved in those two fights that his jab is possibly the best in boxing, a tool capable of keeping opponents at range. He is a sharp puncher who rarely absorbs flush shots. Perhaps most of all, his athleticism should present fits for Lomachenko, who struggled at times against a boxer in Ortiz with a similar style to Haney, but on a lower level.

Haney would surely look to double and triple up on the jab to disrupt Lomachenko’s timing and stop him from using creative angles to land his power shots. Lomachenko would have to start faster and test Haney early to make him doubt himself.

While Haney was dominant in two wins over Kambosos, Lomachenko is a far tougher opponent whose experience, guile and ring smarts have carried him to the pinnacle of the sport. Haney, of course, is much younger and bigger, and with his confidence brimming as the undisputed champion, carries the edge into the potential matchup. — Coppinger