China has begun another series of military exercises around Taiwan as tensions continue to rise following a 24-hour visit to the island by US House Speaker Nancy Pelosi.

Chinese state media is reporting the drills are underway hours after suspected drones flew over Taiwan’s territory on Wednesday and hackers targeted the defence ministry’s website.

Taiwan said before the military exercises began on Thursday morning that some of the drills were due to take place within its 12-nautical-mile sea and air territory.

That has never happened before and a senior ministry official described the potential move as “amounting to a sea and air blockade of Taiwan”.

Taiwan also said its military is closely monitoring the situation in the strait between the island and mainland China.

The ministry added it will “react appropriately” to enemy behaviour to “safeguard national security and sovereignty”.

Taiwan has been on alert while China has been conducting military exercises in response to the 24-hour visit by Ms Pelosi, the most senior American politician to visit the island in 25 years.

China considers the island to be part of its territory and and opposes any engagement by Taiwanese officials with foreign governments.

On Thursday, Major General Chang Zone-sung, from the Taiwanese army’s Kinmen Defense Command, said a pair of suspected drones flew into the area of the Kinmen islands at around 9pm and 10pm local time (2pm and 3pm UK time) on Wednesday night.

The heavily fortified islands, governed by Taiwan, are just off the southeastern coast of China near the city of Xiamen.

“We immediately fired flares to issue warnings and to drive them away. After that, they turned around. They came into our restricted area and that’s why we dispersed them,” Major General Chang said.

“We have a standard operating procedure. We will react if they come in,” he continued.

Major General Chang said he believed the drones were intended to gather intelligence on Taiwan’s security deployment in its outlying islands.

Meanwhile, Taiwan’s defence ministry said it is working closely with other authorities to enhance cyber security after hackers targeted its website and temporarily brought it offline.

The cyber attack comes after several of Taiwan’s government websites, including the presidential office, were targeted earlier this week.

Taiwanese authorities said some of the attacks were carried out by China and Russia.

The continuous cyber attacks on government websites “have not caused damage so far”, a Taiwan cabinet spokesman said.

Taiwan’s government is now urging the island’s companies to enhance their cybersecurity in the coming days as authorities were seeing a record number of attacks on their websites amid escalating tensions with China. 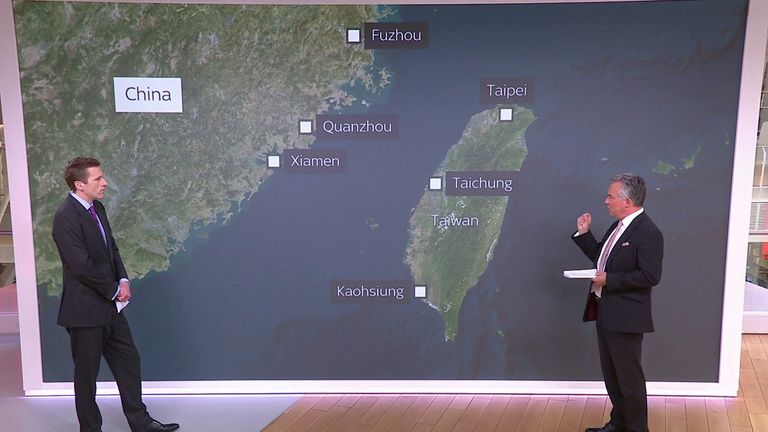 Could Taiwan defend itself against China?

Earlier on Wednesday, Taiwan scrambled jets to warn away 27 Chinese aircraft in its air defence zone, the island’s defence ministry said, adding that 22 of them crossed the median line separating the island from China..

It came before China’s Taiwan Affairs Office said punishment of pro-Taiwan independence diehards and external forces was reasonable and lawful.

Read more:
Why is Nancy Pelosi’s trip to Taiwan so controversial – and why are US-China tensions so high?
Analysis: Adam Boulton on the rising rhetoric stirred up by Nancy Pelosi’s visit
Pelosi leaves Taiwan as China is accused of invading territory in show on force

The Beijing-based office added that Taiwan is not a “regional” issue but China’s internal affair.

US House Speaker Nancy Pelosi concluded her visit to Taiwan on Wednesday with a pledge that the US commitment to democracy on the self-governing island and elsewhere “remains ironclad”.

Weird Alibaba: This $3,200 electric truck might be the next Chinese EV I need to buy
Ruto wins Kenya presidential election as scuffles break out at count centre
Expectation high as £16m-an-episode Game Of Thrones prequel is ready to hit screens
Is Eurovision coming to your city next year? UK host shortlist revealed
Wildfire risk raised to ‘exceptional’ – the highest it can be – as four day amber alert begins