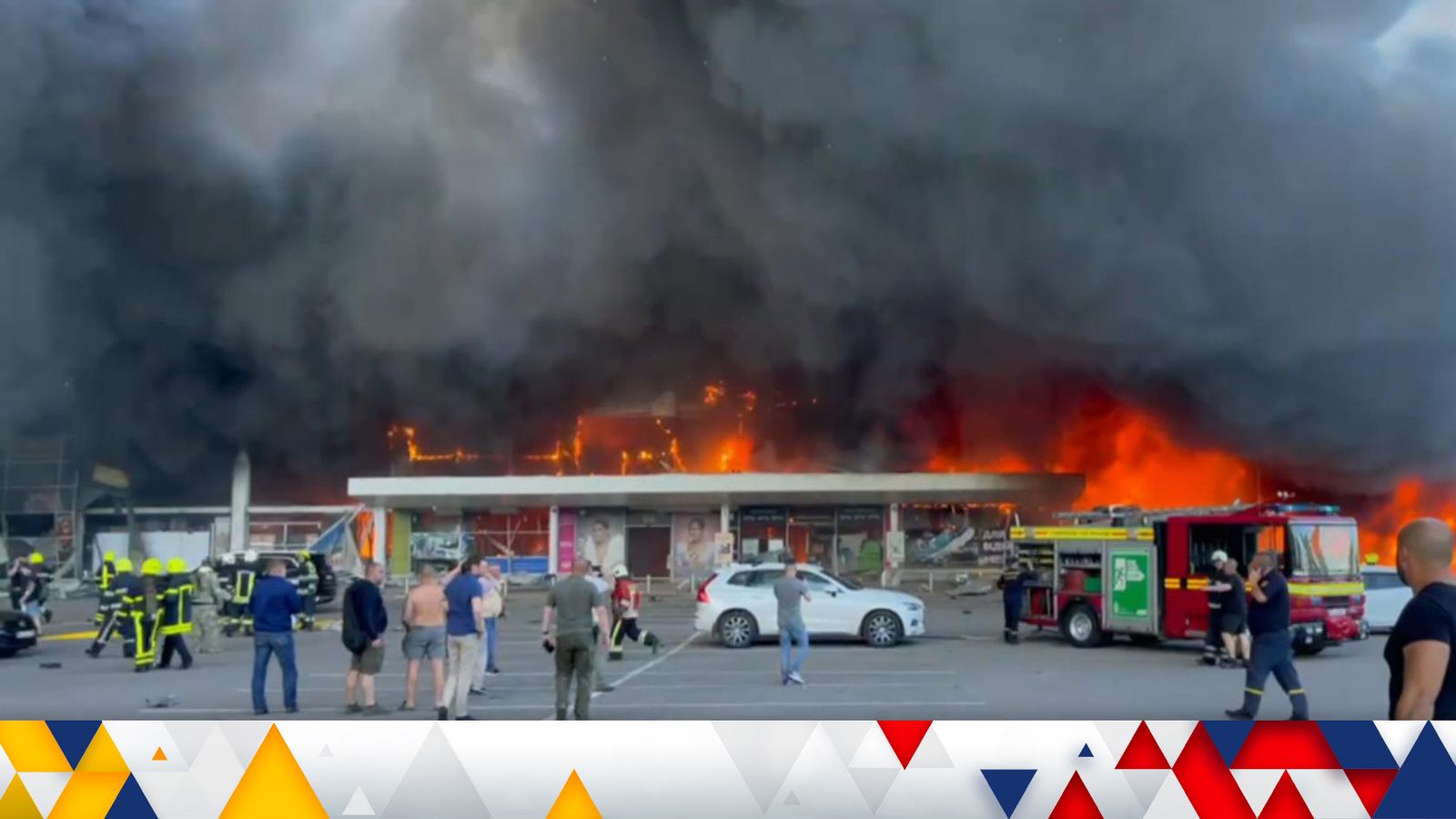 A shopping centre with over 1,000 civilians inside has been hit by a Russian missile strike in the Ukrainian city of Kremenchuk, President Volodymyr Zelenskyy has said.

“The mall is on fire, firefighters are trying to extinguish the fire, the number of victims is impossible to imagine,” said the country’s leader, writing on the Telegram messaging app.

Footage on social media showed a large number of people stood outside as a huge blaze raged inside the building and dark smoke billowed into the sky.

The city’s mayor Vitaliy Meletskiy said the strike on the “very crowded” structure had caused deaths and injuries, but gave no figures.

At least two people were killed and 20 were injured in the attack, said Kyrylo Tymoshenko, the deputy head of the Ukrainian presidential office.

A rescue operation was under way and nine of the wounded were in a serious condition, Mr Tymoshenko added.

Mr Zelenskyy stressed the target presented “no threat to the Russian army” and had “no strategic value”.

He accused Russia of sabotaging “people’s attempts to live a normal life, which make the occupiers so angry”.

“Russia continues to take out its impotence on ordinary civilians. It is useless to hope for decency and humanity on its part,” the president said.

There was no immediate comment from Russia, which denies deliberately targeting civilians.

Kremenchuk is the site of Ukraine’s biggest oil refinery.

The industrial city had a population of 217,000 before Russia’s invasion in February.

Read more:
NATO to dramatically increase forces on high alert to over 300,000 from 40,000
Overpowering stench of death as Kyiv mortuaries fill up with bodies

The attack came as Russia launched an all-out assault on the last Ukrainian stronghold in the eastern Luhansk region, “pouring fire” on the city of Lysychansk from the ground and air, according to the local governor.

Western leaders meeting at the G7 summit in Germany have pledged continued support for Kyiv, including more air defence systems, and further sanctions against Moscow.

Wildfire risk raised to ‘exceptional’ – the highest it can be – as four day amber alert begins
Disney is raising prices, but this time, don’t blame inflation
‘You can’t heat your home with hope’: Sunak unveils plan to slash energy bills for millions
All London children aged one to nine to be offered polio vaccine after more virus found in sewers
Senate improves EV tax credit in largest climate bill ever