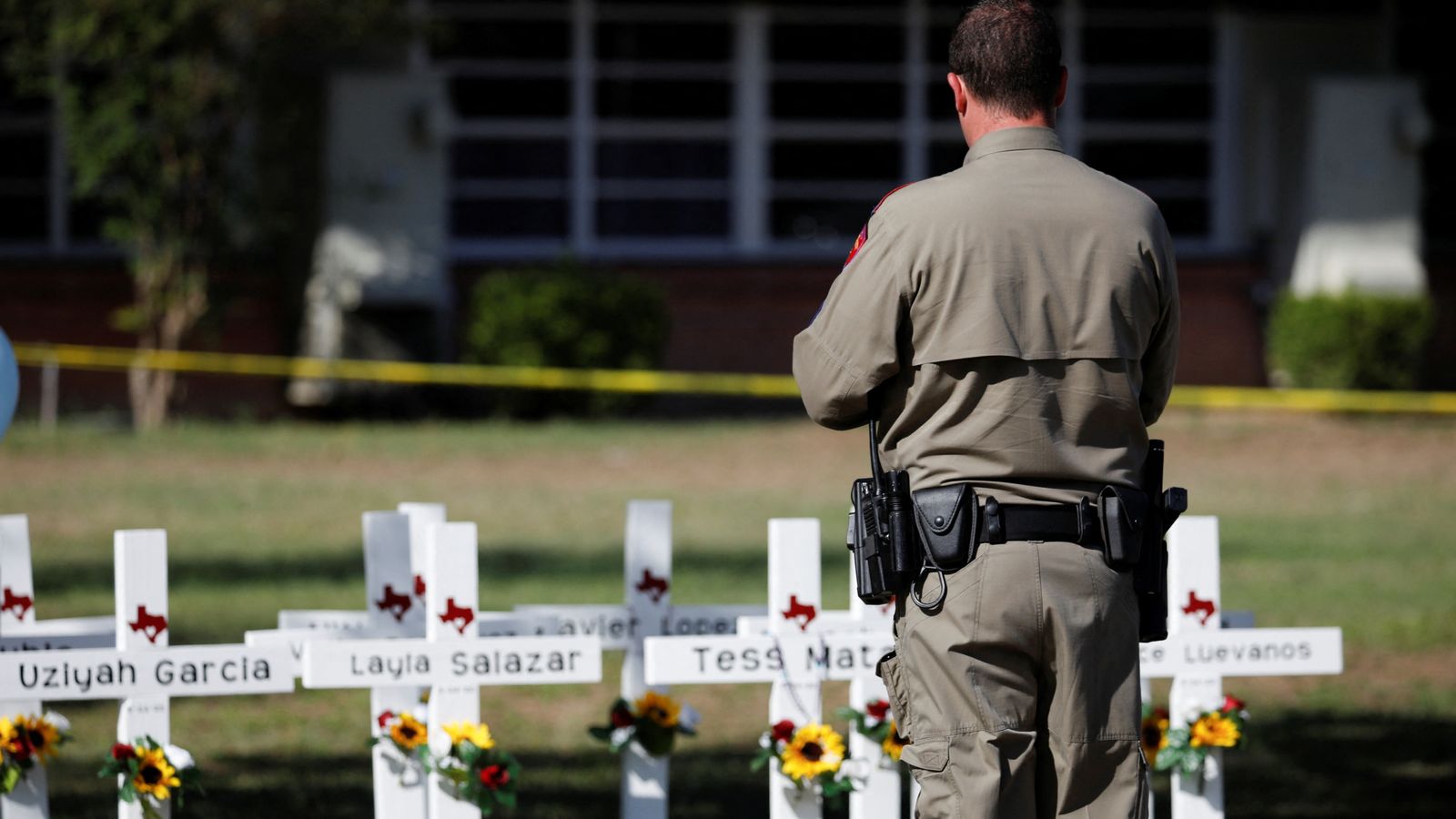 Questions are being asked about how much time elapsed before police stormed a Texas primary school classroom to end a rampage by a gunman inside.

Texas Department of Public Safety director Steve McCraw said that 40 minutes to an hour had elapsed from when Salvador Ramos first opened fire on the school security officer, to when a tactical team shot him dead.

And the community is now demanding to know the full detail about what exactly happened during that time.

Their questions come as it emerges that the husband of one of the teachers who died has also passed away – less than 48 hours after the tragedy.

Joe Garcia had been married to high school sweetheart, Irma Garcia, for 24 years before she was gunned down on Tuesday at Robb Elementary in Uvalde.

“I don’t even know how to feel. I don’t believe it. I don’t want to believe it” that Joe Garcia has passed away, Irma’s nephew, John Martinez, told Sky’s US partner, NBC News.

It is thought he suffered a heart attack after going to his wife’s memorial to leave flowers. A relative said on a social media post that he believed Joe had “died of a broken heart” after losing “the love of his life of more than 30 years, was too much to bear”.

The couple had four children.

Read more:
Duchess of Sussex lays flowers at site of massacre
Why do US gun sales increase after mass shootings?
Lone shooter drill lessons from my nine-year-old and why handguns became humdrum

One Texas law enforcement official has said the 18-year-old gunman walked in unimpeded through an apparently unlocked door.

After entering the school, Ramos barricaded himself in a classroom and began to kill.

Another official said Border Patrol agents had trouble breaching the classroom door and had to get a staff member to open the room with a key.

In the meantime, it has been reported, one of the victim’s fathers had become so frustrated about time apparently elapsing that he threatened to “rush in”.

Javier Cazares, whose daughter, Jacklyn Cazares, was killed in the attack, said he raced to the school when he heard about the shooting, arriving while police were still gathered outside.

Upset that police were not moving in, he raised the idea of charging into the school with several other bystanders.

“Let’s just rush in because the cops aren’t doing anything like they are supposed to,” he said. “More could have been done.”

“They were unprepared,” he added.

A Texas Public Safety department spokesman said later that authorities could not give a solid estimate of how long the gunman had been in the school.

“The bottom line is law enforcement was there,” Mr McCraw said. “They did engage immediately. They did contain (Ramos) in the classroom.”

Uvalde Police chief Daniel Rodriguez maintained officers had responded “within minutes” and said he felt it was “important for our community to know that”.

He said there was an ongoing investigation into all aspects of the shooting being led by the Texas Rangers adding: “I understand questions are surfacing regarding the details of what occurred.

“I know answers will not come fast enough during this trying time, but rest assured that with the completion of the full investigation, I will be able to answer all the questions that we can.”

In the wake of yet another mass shooting, gun safety advocates are now pushing President Joe Biden to take stronger measures to curb such violence.

On Thursday they spoke to White House representatives and urged the president to appoint a gun violence tsar.

They also called on Mr Biden to make an emergency declaration on gun violence (a situation where a government is empowered to be able to put through policies it would normally not be permitted to do), issue an executive order (a signed, written, and published directive from the president) on background checks for firearms purchases, and advocate lifting the Senate filibuster if necessary (the rule that requires at least 60 votes in the 100-seat Senate to pass most legislation).

The National Rifle Association (NRA) has said it will continue with its annual convention in Houston, Texas, over this upcoming holiday weekend.

It promises to showcase “over 14 acres of the latest guns and gear “.

It issued a message of condolence to the victims of Uvalde on its convention website.

It read: “Our deepest sympathies are with the families and victims involved in this horrific and evil crime.

“On behalf of our members, we salute the courage of school officials, first responders and others who offered their support and services.

“Although an investigation is under way and facts are still emerging, we recognise this was the act of a lone, deranged criminal.

“As we gather in Houston, we will reflect on these events, pray for the victims, recognise our patriotic members, and pledge to redouble our commitment to making our schools secure.”