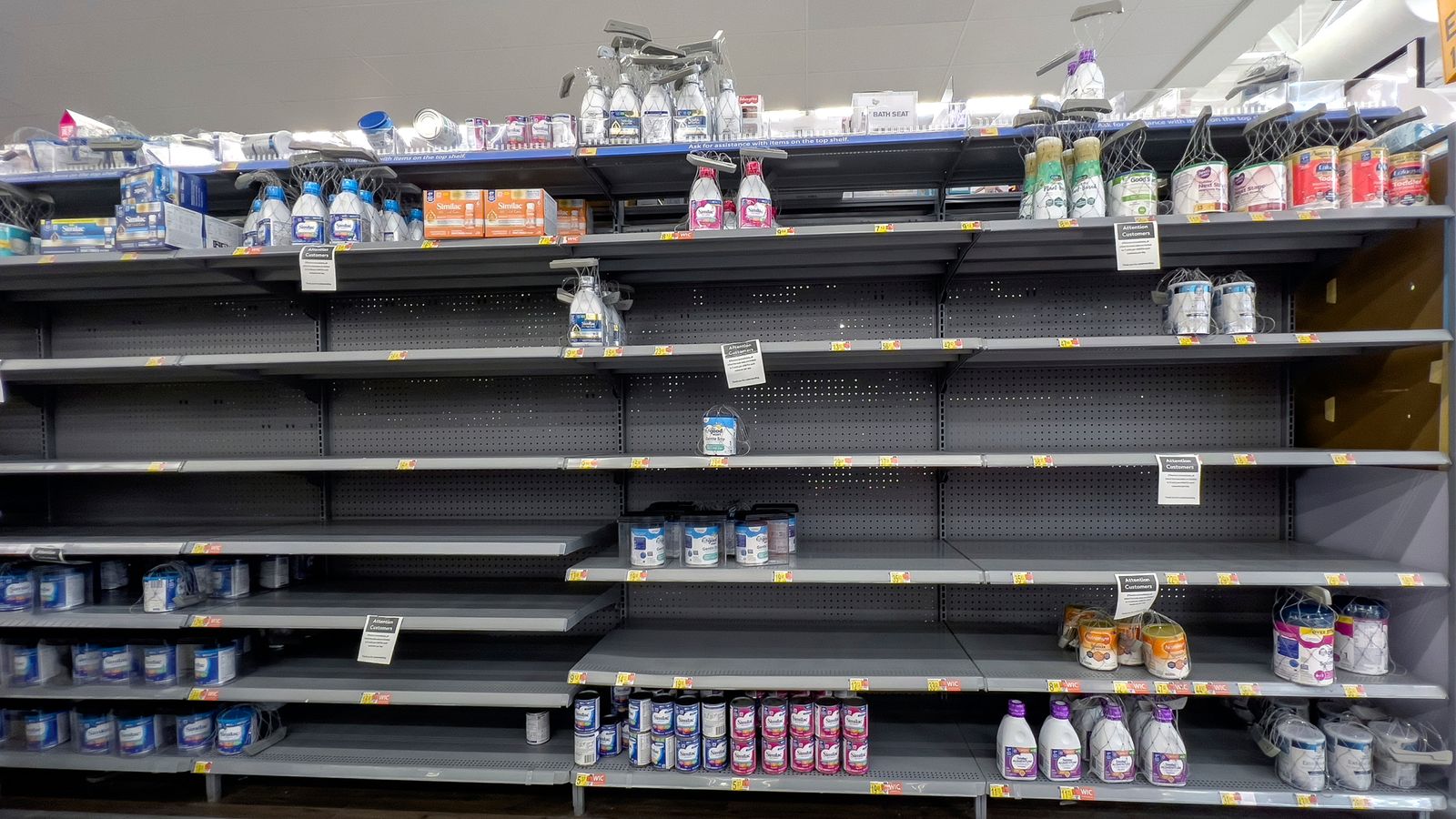 In the leafy suburb of Potomac in Maryland a group of mums is mobilising.

Facing nationwide shortages of infant formula, the Nappy Network charity is stepping up.

For a couple of months, they’ve been holding a weekly formula drive and the logo says it all: “Bring what you can, take what you need.”

Here, parents can drop off donations of formula for families with babies and infants to feed.

Two small tables are set up, and as soon as handouts arrive, they’re picked up.

“The day before yesterday I went to like eight or nine stores looking for it but there isn’t any,” she said.

Lindsay Gill set up the Nappy Network, and described the situation as a “crisis”.

“There’s gonna be a sense of panic when you go into a store and the shelves are bare and there’s no other option to feed your child,” she said.

“There’s no formula available. So whether you have access to money or not it doesn’t matter, if there’s nothing to buy we’re all in need.”

Emmanuel Newsome has a seven-week-old daughter at home. He’s come to collect a small packet of formula, the brand he uses is impossible to find elsewhere.

“It’s extremely hard. So we’ve been to a bunch of different stores, haven’t seen anything on the shelves, we look online, there’s nothing online,” he said.

Why is there a baby formula shortage in the US?

There have been widespread shortages of baby formula in the US since February due to potential contamination issues at a major manufacturing plant.

Abbott Laboratories was forced to shut its site in Sturgis, Michigan and recall a number of its powdered formula products after four babies who had been given formula developed bacterial infections.

The four cases were reported in Minnesota, Ohio and Texas between September and February, with two of the babies dying. Although no firm link between Abbott-produced formula has been proven, the Michigan factory is still closed following the six-week investigation by regulator the Food and Drug Administration (FDA).

A preliminary report in March showed traces of the bacteria cronobacter on surfaces in the plant – but none in areas where powder is made.

The FDA and Abbott say they are working to resolve the problem, with the White House stepping in by invoking emergency legislation to boost production of formula.

But shortages are expected to continue as Abbott says that even after it reopens the Michigan plant, it will take eight to 10 weeks to get new products on shelves.

Cronobacter naturally occurs in soil and water, and although rare, can be fatal to babies, causing dangerous blood infections and swelling of the brain.

Mr Newsome can’t believe there’s such a crisis in the US.

“We’re one of the largest GDPs in the world, it’s kind of concerning to have a basic necessity run short,” he said.

This isn’t the kind of neighbourhood you’d expect would need handouts.

But the shortages are affecting every community across America.

Ana Guzman has a one-year-old daughter and says it’s “unimaginable” she’s relying on charity to help feed her.

“It’s very stressful, and it is something that’s constantly on your mind because you know how many times your child eats a day and you know how long the formula lasts,” she said.

Fierce local battles over power lines are a bottleneck for clean energy deployment
‘Physically I will survive, but morally I’m shocked,’ says survivor of Ukraine shopping centre attack
‘Wholly wrong’ to block Sky News questions about JK Rowling, admits Warner Bros
Big questions for women’s Euros: England or Spain to win it all? Or will Netherlands, Germany go on a run?
NATO’s expansion is not easing Putin’s paranoia – and dictators cannot afford to lose